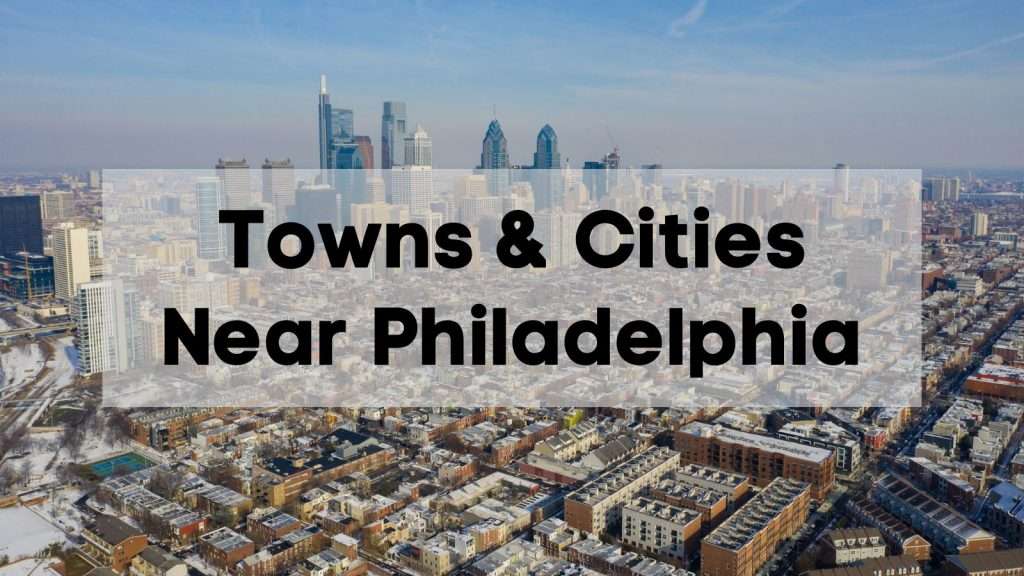 Visiting or moving to the Philadelphia area? Exploring nearby towns and cities in Philadelphia is a great way to understand the area and decide which areas are worth visiting.

Philadelphia is the central city of the Delaware Valley, a sprawling metropolitan region covering four states. There are dozens of cities near Philadelphia, Pennsylvania within a 30-minute drive including major cities in New Jersey. Counties around Philadelphia include:

Many towns around Philadelphia are on the Main Line, the former main line of the Pennsylvania Railroad. Main Line suburbs to the west extend to Bryn Mawr and Paoli, PA. A large number of Philadelphia towns are also part of the Welsh Tract, a portion of Pennsylvania settled by Quakers from Wales.

This complete guide covers all the towns and cities near Philadelphia plus major cities close to Philly. Just note that actual towns and even incorporated cities are uncommon in Pennsylvania and even New Jersey. Instead, you’ll find mostly boroughs and townships, both types of municipalities similar to cities and towns.

A good place to start when exploring the outskirts of Philadelphia is the largest Philadelphia cities. There are ten cities, townships, and boroughs within just 15 miles with a population of at least 25,000!

The county seat of Camden County, Jersey, Camden is the nearest city to Pennsylvania. This large city close to Philadelphia is just across the Delaware River from Center City, Philadelphia’s bustling downtown core. Camden is a small but exciting city home to popular attractions on the Camden Waterfront like the USS New Jersey and the Adventure Aquarium. Camden also boasts several colleges and universities like Rutgers University-Camden which account for 45% of the city’s employment.

Upper Darby has a reputation for holding “the world in one place” thanks to its foreign-born population of 24%, rivaled only by New York City and higher than even Philadelphia. The town’s most well-known attraction is Tower Theater, named one of America’s top ten live music venues and used to record many live albums.

Like other townships, it’s divided into many neighborhoods and villages or towns. Some of the most charming towns outside Philadelphia in Haverford include: 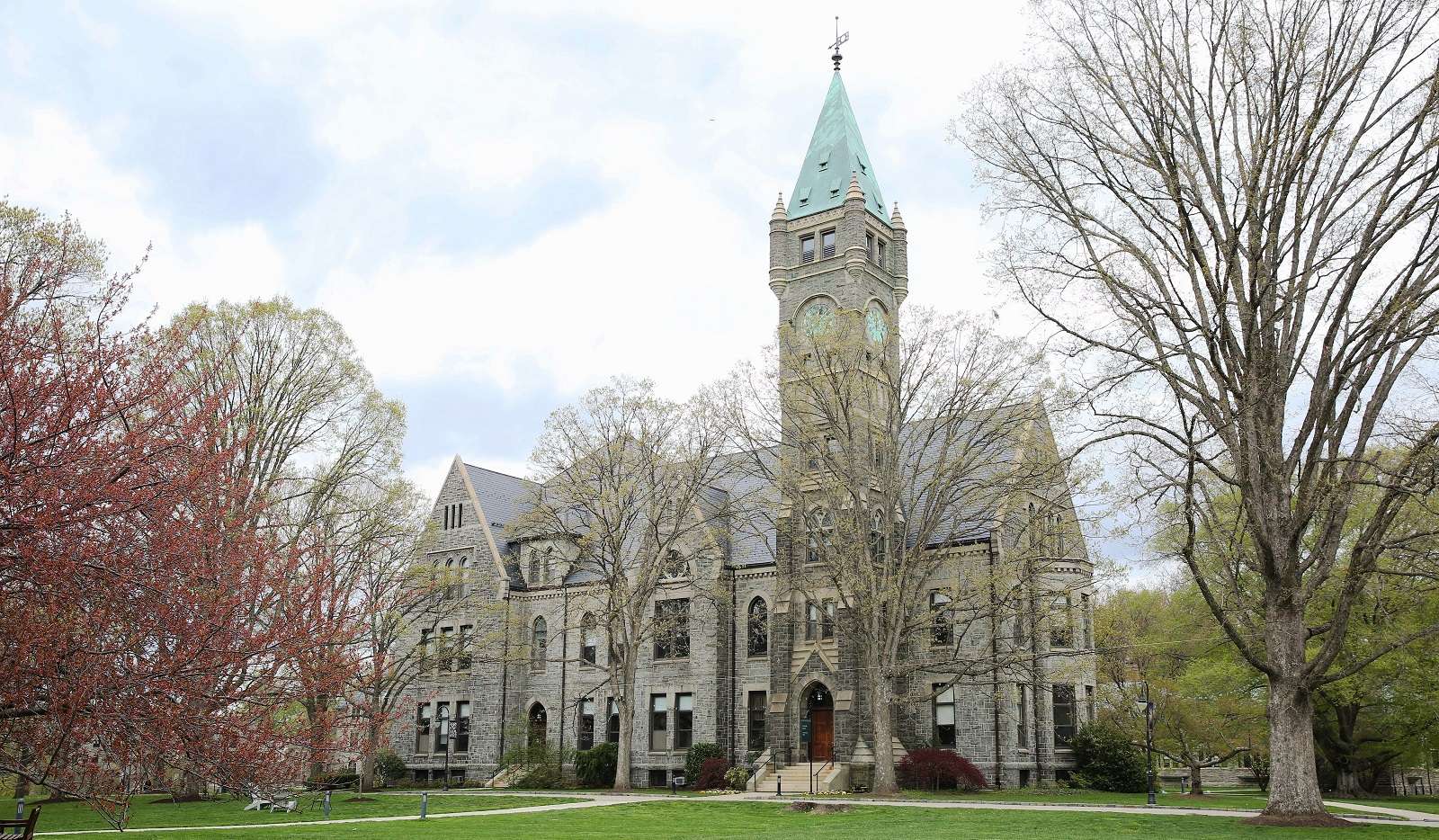 Cherry Hill is the largest municipality in Camden County, New Jersey and the 12th largest in the state. It’s one of the primary commercial centers of the region and a major edge city close to Philadelphia.

There are 51 parks in Cherry Hill, NJ and several golf courses. Many consider it the best place to live outside of Philadelphia for families with a fairly short commute to Center City and great amenities. Jake’s Place Playground is a large inclusive playground popular with families with young kids. Nearby is the Barclay Farmstead Museum, a Quaker farmhouse from the 1800s, and the very popular Springdale Farm Market on a working farm with produce, a bakery, and a plant nursery.

One of the primary inner ring suburbs of Philadelphia, Lower Merion Township is the 9th largest municipality in Pennsylvania. This town near Philadelphia borders West and Upper North Philadelphia communities as well as Conshohocken, Radnor Township, Havertown Township, and Whitemarsh Township with an eastern border along the Schuylkill River.

There are several major Philadelphia towns in Lower Merion Township. Bryn Mawr, Haverford, Ardmore, Villanova, and Rosemont are partially within its boundaries. It’s also home to:

Cheltenham Township is one of the three most populous townships in Montgomery County, PA and one of the primary inner ring suburbs outside Philadelphia. It’s also one of the most densely populated cities in Philly with up to 10,000 people per square mile. The area along Cheltenham Avenue has a very urban feel with high-rise apartment buildings and rowhouses.

Bordering Northeast and North Philadelphia areas as well as Jenkintown, Springfield, and Abington, Cheltenham Township is home to ten communities, most of them CDPs. The largest area Glenside and Elkins Park. Glenside is one of the best small towns near Philadelphia for young professionals and millennials. Just six miles from Center City, Glenside has one of the busiest SEPTA stations, Keswick Theater, numerous parks, and plenty of options for recreation and entertainment. It’s also home to Arcadia University.

Deptford Township is a city close to Philadelphia in South Jersey adjacent to the Walt Whitman Bridge that connects Philadelphia and New Jersey. The township is made up of several unincorporated communities including Oak Valley, the only CDP, and Deptford. The community is known for its beautiful parks like the central, urban Fasola Park with workout stations, a splash pad, and playground and Tall Pines State Preserve.

Bordered by the borough of Media, Swarthmore, and Chester, the only city in Delaware County, Ridley Township is outside the inner ring of Philadelphia but one of the largest Philadelphia “cities” within 15 miles. There are about eight communities in Ridley Township, each with their own fire station, but all are served by the same school district, library, police, and taxes and collectively known as “Ridley.” The central community is Folsom, a CDP and home to more than 8,000 people.

One of several large New Jersey cities near Philadelphia, Gloucester Township’s motto is “a great place to live, work, and play.” There are more than one dozen unincorporated communities and CDPs in Gloucester Township including Blackwood and Glendora, each with about 4,500 people.

A post shared by Chanticleer, a pleasure garden (@chanticleergarden)

Usually known as just Radnor, this first class township has home rule status and it’s the largest municipality in Delaware County. It’s also one of the oldest in Pennsylvania. This large city close to Philadelphia is famous for its universities and colleges including Cabrini University and Villanova University in the community of Villanova. The community of Wayne, also shared by Tredyffrin and Upper Merion townships, is one of the most affluent areas of the country with several historic neighborhoods and Chanticleer, a pleasure garden, one of the township’s top attractions.

MAP of Cities Near Philadelphia

Other Cities Close to Philadelphia

You’ll find dozens of large boroughs, townships, and cities near Philadelphia, PA. In fact, there are more than 80 municipalities within 25 miles of Philadelphia with a population of at least 10,000!

There are tons of great towns near Philadelphia to explore on this list. Bensalem Township borders Northeast Philly and it’s the 10th largest municipality in Pennsylvania. Founded in 1692, it’s nearly as old as Philadelphia! It has no cities or boroughs but several major communities. From Neshaminy State Park, you can see the Philadelphia skyline while the Penn Community Bank Amphitheater is one of the area’s top music venues. The most well-known attraction is the Parx Casino with live horse racing and slots.

Levittown, a planned community just 26 miles from Center City, is the largest Philadelphia suburb, even though it’s not incorporated. It’s so large, there are 41 neighborhoods or “sections!”

Trenton, NJ is the second largest of Philadelphia cities within 25 miles after Upper Darby. The capital of New Jersey, Trenton is also known as the destination of Washington’s army as they crossed the Delaware to defeat Hessian troops. 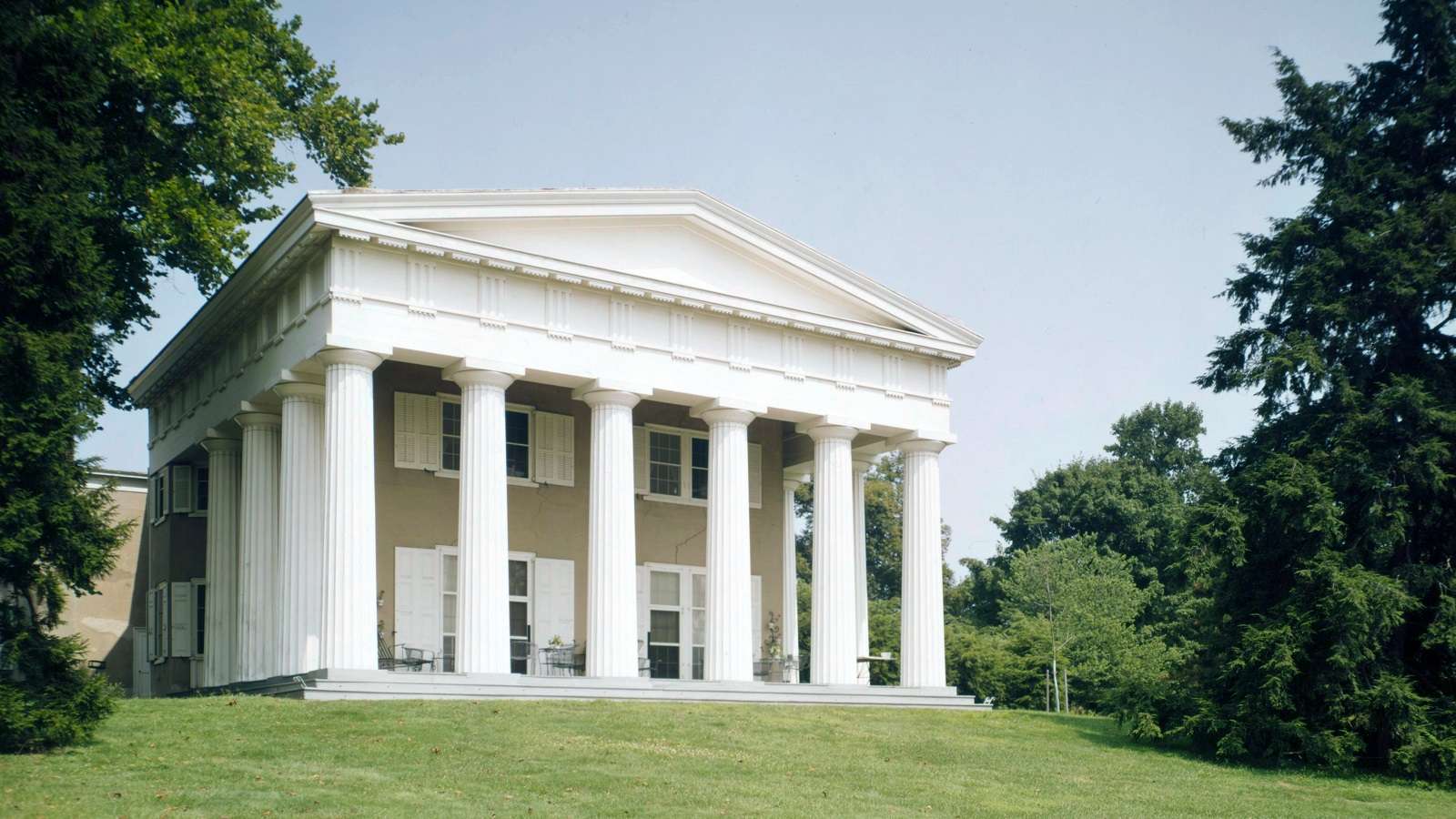 There are dozens of small towns outside Philadelphia. This list contains mostly boroughs with at least 3,000 people but less than 10,000 within 25 miles of Center City. You’ll find gems like Swarthmore with its famous college and Media, PA, America’s Garden Capital!

Philadelphia is located between Washington, DC and New York City, both easily within day trip distance. You’ll also find a dozen other major cities within 30 minutes to a few hours, including several other Pennsylvania big cities like Allentown and Harrisburg, the capital.

Does settling down in one of these gorgeous towns or cities in Philly sound ideal? If you’re relocating within the Philadelphia area, Suburban Solutions is ready to help with price and delivery date guarantees and affordable rates. Call our five-star Philadelphia movers today to get started with a free, personalized estimate!