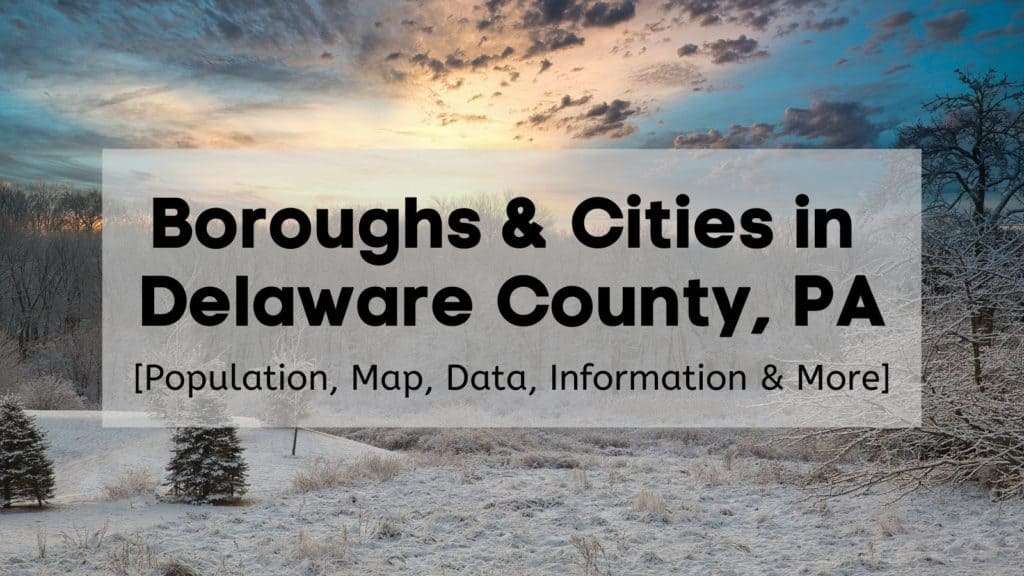 Are you thinking about moving to Delaware County or just visiting the area? Home to some northern Philadelphia Main Line communities, the county is adjacent to Philadelphia and features some of the best suburbs in Philadelphia for families, commuters, and retirees. This historic county has so much to offer, from beautiful parks and outdoor recreation to family-friendly activities and festivals.

Want to get started by exploring the largest cities in Delaware County? It helps to first understand Delaware County, PA municipalities. There is only one city, an uncommon type of municipality in Pennsylvania! Instead, most large communities are boroughs which are similar to towns. Townships are usually smaller than boroughs. Finally, there are census-designated places (CDPs) which are only designated by the U.S. Census Bureau for data purposes and unincorporated communities. This guide will cover the largest Delaware County, PA cities and boroughs, but not townships or CDPs.

Fun fact: If townships and census-designated places were included, four townships and three CDPs would make the list of the 10 largest municipalities in Delaware County, PA by population. In fact, two townships – Upper Darby (pop. 83,000) and Haverford (pop. 49,000) – are larger than the county’s only city, Chester (pop. 32,000)!

There are no cities or boroughs in Delaware County that make the list of top 10 largest cities in Pennsylvania.

Delaware County, known locally as Delco, is part of one of the richest areas in Pennsylvania: the Delaware Valley Philadelphia suburbs of Delaware, Montgomery, Chester, and Bucks counties. The 4th most affluent PA county, the per capita income in Delaware County is $32,067.

Delaware County is the fifth most populous county in Pennsylvania. The county seat is Media, a borough that doesn’t make this list with a population of only 5,500.

Where is Delaware County? 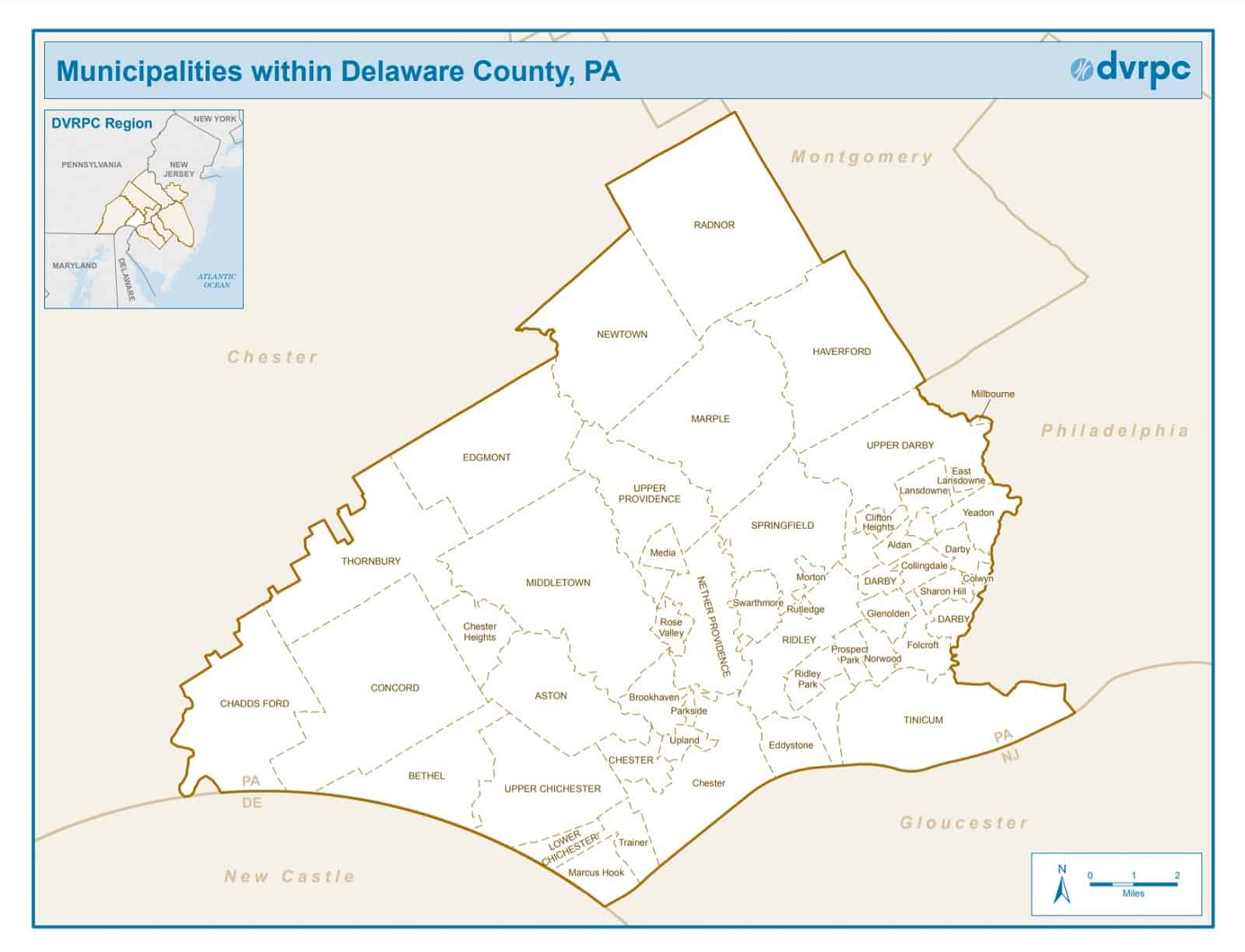 On this list of Delaware County, PA cities, Chester is actually the only municipality that is a city! Once known as the Saloon Town of Greater Philadelphia, it’s the oldest city in Pennsylvania and founded in 1682. Today, it’s one of the most affluent communities in Delaware County and popular with families young professionals. The city is just 19 miles outside Center City on the Delaware River.

Chester has plenty to see and do including Harrah’s Philadelphia Casino & Racetrack, one of the city’s top draws for visitors. The massive Subaru Park stadium hosts major concerts and Philadelphia Union soccer games.

Second on this list of cities in Delaware County by population is the borough of Yeadon. Just six miles outside Center City, Yeadon is the largest of Delaware County boroughs and bordered by Philadelphia (over Cobbs Creek), the boroughs of Darby and Lansdowne, and Upper Darby Township. Yeadon was once part of New Sweden in the mid-17th century but was renamed Yeadon for Yeadon Manor in Yeadon, UK.

Yeadon is a great place to live for Center City commuters thanks to its proximity to downtown Philly and it’s served by the light rail system. Its outdoor recreation, low crime, and excellent healthcare options also make it perfect for seniors and families alike. Yeadon is centered around the large Holy Cross Cemetery and shares the beautiful, wooded Cobbs Creek Park with Philadelphia.

Only 6 miles outside Center City is the borough of Lansdowne, third on this list of boroughs and cities in Delaware County, PA. Served by Philadelphia public transportation with a SEPTA train station, Lansdowne is known for its beauty with charming, well-maintained homes and a main street and regular community events. It’s also one of the best places to live in Delaware County for families with older kids. It’s home to William Penn High School, the only high school in the William Penn School District that serves several communities like Yeadon, Colwyn, and Darby. Lansdowne is one of the best educated Delaware County cities with 41% of adults holding at least a bachelor’s degree!

Along with shopping and restaurants along Lansdowne Ave and Baltimore Ave, residents enjoy the annual Arts on the Avenue Festival and the Lansdowne Symphony Orchestra. With just over one square mile of land, Lansdowne has 11 parks and recreational areas with a 400-year-old sycamore tree at Sycamore Park and the picturesque Hoffman Park along Darby Creek.

The borough of Darby is only six miles outside Center City. Despite its small population, it has a very urban environment with a dense population in less than one square mile. It’s also one of the most affordable Delaware County, PA cities with a median home price of just $125,000! However, the borough does have a higher crime rate than most communities in the county.

The borough of Collingdale is a small Philadelphia suburb just 14 miles outside Center City. The fifth largest on this list of cities in Delaware County, Collingdale is adjacent to the boroughs of Aldan, Glenolden, Sharon Hill, and Darby Township.

Collingdale, PA is best known for its cemeteries. There are four cemeteries, three active, that take up a large share of Collingdale’s small area of land.

This quiet community is mostly residential with local shops and small eateries, but it’s close to Baltimore Pike and McDade Rd with many shopping and restaurants within 15 minutes. Collingdale Park is the largest park in the borough and centrally located with a playground, tennis courts, and game fields close to the Collingdale Swim Club.

Brookhaven has rapidly transformed over just 50 years from a stock and dairy farm community with 672 people in 1945 to a thriving residential community of more than 8,000. The most well-known landmark of Brookhaven is the Brookhaven Shopping Center. A popular destination for shopping in the area, Brookhaven is also home to the Shoppes of Brookhaven.

Brookhaven is one of the most expensive Delaware County, PA cities and boroughs, but it offers a great quality of life with not only shopping and restaurants but several parks including Memorial Park with a butterfly garden.

Glenolden is a great place to live in Delaware County for families with younger kids. Part of the Interboro School District, it’s home to Glenolden School, a highly rated elementary and middle school. The picturesque Glenolden Park is in the center of the borough while residents have plenty of shopping and dining options along N Chester Pike running through the center of town or via the SEPTA train station that makes surrounding boroughs easy to reach.

Ridley Park is one of the most affluent boroughs in Delaware County (not including townships!) and one of the most expensive places to live. After Lansdowne, it’s the second most educated community on this list.

Ridley Park is best known for the CH-47 Chinook helicopter division of Boeing based here. Ridley Park is also the first planned community in Delaware County and it was designed by noted landscape architect Robert Copeland. With its 20-acre lake and landscaped parks and streets, it quickly became a summer resort for affluent Philadelphians who built Victorian style homes here in the late 19th century.

Ridley Park isn’t just one of the most beautiful Delaware County, PA municipalities; it also offers convenient transportation with a SEPTA train station plus I-95 and Chester Pike cutting through the borough.

Just 5 miles outside Center City on Darby Creek is the beautiful borough of Clifton Heights. Known as the home of Italian ice company Rosati Water Ice and 1980s rock band Cinderella, Clifton Heights is bordered by Upper Darby Township and the boroughs of Aldan and Lansdowne.

Once rich farmland, Folcroft became a residential Philadelphia suburb in the late 19th century once the railroad reached the area. Bordered by Darby Township and the boroughs of Glenolden, Collingdale, Norwood, and Sharon Hill, Folcroft is known for the John Heinz National Wildlife Refuge at Tinicum which covers the southern half of the borough. The Tinicum Marsh preserve offers a beautiful natural retreat and hiking with wildlife sightings right next to Philadelphia.

Here is a complete list of cities in Delaware County, sorted first by population, then other metrics from the US Census. Education Level is the % of the population that has finished high school. The Population Growth is from 2010 to 2019. If they exist, under Type, we have included cities, towns, villages, census designated places and more.

How many boroughs are in Delaware County, PA?

There are 27 Delaware County, PA boroughs. The largest is Yeadon with a population of 12,000.

How many cities are there in Delaware County, PA?

There is only one city: Chester. There are only 56 cities in Pennsylvania in total but more 67 counties.

What is the wealthiest city in Delaware County?

What is the most populous city in Delaware County?

Chester is the largest Delaware County, PA city and the only city in the county with a population of 32,500.

Which of the Delaware County Cities Is Right for You?

Does one of these charming and beautiful cities or boroughs in Delaware County, Pennsylvania call to you? If you’re moving to Philadelphia and looking for a safe, family-friendly suburb close to Center City, you’ll find plenty of great options!

Once you’ve settled on where you’re relocating, give us a call at Suburban Solutions to help you get there. Our full-service movers are ready to deliver the top-notch customer service you need and a stress-free moving day!

Please confirm deletion. There is no undo!