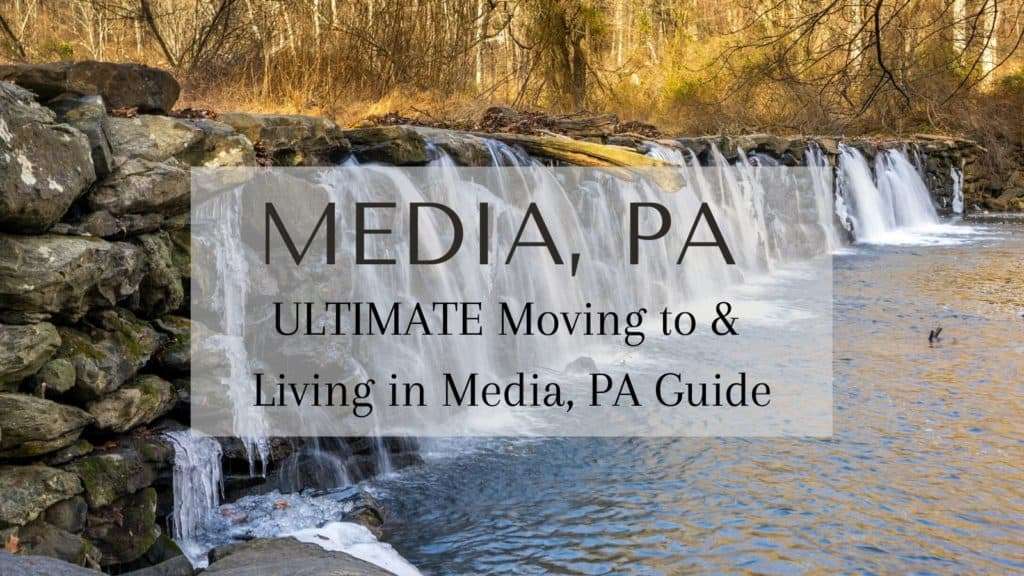 Media, PA, a popular suburb of Philadelphia, is a town like no other. The Media nickname is Everybody’s Hometown thanks to its welcoming, close-knit community. For many, living in Media, Pennsylvania is a dream come true! The town has been named one of the best places to live in Pennsylvania thanks to its fun nightlife, great public schools, low crime, diversity, and family amenities. It’s also been ranked as one of America’s coolest suburbs. Residents love its famously walkable and charming town center with green space, bars, art galleries, movie theaters, boutiques and more. Residents love the annual Dining Under the Stars event in which State Street is shut down to vehicles as restaurants expand into the street with outdoor seating weekly from May through September.

Not sure if moving to Media, PA is the right move for your family? Here’s everything you’re going to love about this charming and hip Philadelphia suburb.

Located in Delaware County, Pennsylvania, Media is a small town and borough with a population of just 5,300. Media is located in the 610 and 484 area codes and zip codes 19063, 19065, and 19091. Note that “Media” usually refers to not only the borough but municipalities with the same zip code. While the Media borough has a population of 5,300, the Media zip code 19063 has a population of 35,700. This includes surrounding areas of Garden City, Rose Valley, Glen Riddle, and Elwyn.

Curious about the people living in Media, PA? The median age in the town is 40, older than the national average. The town is fairly affluent with a median household income of $71,300. Only 7% of residents were born outside the U.S., lower than average in the country. About 85% of the population is white, 8% is black, 2.5% are Hispanic, 1.5% are Asian, and 2.5% are two or more races.

Media’s most famous resident? Comedian and actress Wanda Sykes who you may spot around town!

Media Climate & Weather – What to Expect

Media enjoys some of the most pleasant weather in Pennsylvania! You can expect plenty of rain with about 43 inches per year on average but just 13″ of snow every year. Nearly two-thirds of the year is sunny! It does get very warm in the summer with highs of up to 90 degrees in July and lows in the mid-20s in January. There are about 20 days a year in which the temperature tops 90 degrees, usually in July. This is also the wettest month of the year which gives you some break from the heat.

If you’re moving to Media, PA with kids or planning to start a family, the quality of the public schools is likely a big concern. Media is served by the Rose Tree Media School District. Most schools in the district are rated above-average! Some of the highest-rated schools in Media include Indian Lane El School, Rose Tree El School, and Glenwood El School, all elementary schools that far exceed the state average in terms of test scores and preparedness.

Media is a great place to live if you’re going to pursue higher education. You’ll find dozens of colleges and universities within 25 miles. Within just five miles, you’ll find Pennsylvania Institute of Technology, the prestigious Swarthmore College, Delaware County Community College, and Neumann University, among many others.

What Is the Cost of Living in Media, PA?

Most areas of Pennsylvania are about average in terms of cost of living, but what is the average cost of living in Media? If you’re asking yourself if you can afford to live in Media, it may help to know that Media, PA is about 25-30% more expensive than the national average.

Considering renting after moving to Media? According to RentJungle, the average rent in Media is $1,325. That’s fairly close to the national average rent price of $1,465.

Where do you see yourself living in Media? Do you want a vibrant, young neighborhood or a quiet, mature community? Do you want to be close to the shopping and action or do you prefer more space? There are plenty of Media neighborhoods to consider!

Rose Tree is one of the most affordable neighborhoods in Media and popular with families. It offers fairly affordable apartments with plenty of area parks like Hildacy Farm Preserve and Rose Tree Park, a 120-acre park with sports, concerts, and more.

One of the most prestigious and expensive Media neighborhoods is Moylan, south of South Media. This older neighborhood has manicured homes mostly from the 1940s to the 1960s (and many historic examples from as early as the 1880s) with wealthy and highly educated residents.

Another area to explore is Garden City, a blue collar neighborhood in southern Nether Providence. You’ll find older ranch houses and subdivisions dating to the 1940s with some newer developments in Garden City. A large residential community is designed around Hepford Park. If you have kids or love to stay active, one of the best neighborhoods in Media is the Chester Park area of Garden City with jogging, biking, game fields, and a playground.

You can get an idea of which Media neighborhoods are in your budget by searching for Media, PA homes for sale ahead of your move.

Top Restaurants & Fun Things to Do in Media, PA

Ready to explore the best things to do in Media with kids, friends, and family? Living in Media offers the excitement of the city with the charm and close-knit environment of a small town. You’ll find no shortage of fun attractions in Media to keep you busy year-round.

Spasso’s is one of the most popular things to do in Media for couples on date night. Enjoy an expansive menu of Italian classics like eggplant parmigiana, veal porcini, and fried calamari in a relaxed atmosphere complete with a bar.

Pinocchio’s is Media’s oldest restaurant and definitely one of the best. Pinocchio’s offers a large selection of craft beer for adults while kids enjoy playing with dough while they wait for food. You’ll find all of your pizzeria favorites here including strombolis, pizza, and cheesesteaks.

Ridley Creek covers more than 2,600 acres of meadows and woodlands, offering a beautiful oasis close to the urban city center of Philadelphia. It’s one of the best things to do in Media outdoors with kids and pets with everything from fishing and hiking to the Colonial Pennsylvania Plantation which shows what life was like on a farm before the Revolution. You’ll also find the John J. Tyler Arboretum adjacent to the park.

The Pennsylvania Veterans Museum is one of the top educational attractions in Media and it tells the stories of veterans of WWII, the Korean War, and the Vietnam War. Admission is always free!

Media is a very white collar community with many residents working in management, office and administrative support, and sales. There’s also a very high share of people whose jobs involve math or computers. There are also many jobs in education at local colleges and universities like Haverford College, Swarthmore College, and Eastern University.

You can start the search online for jobs in Media, PA to see what types of careers await you after moving to Media.

Tips for Living in Media, PA

Is your heart set on relocating to the beautiful suburb of Media, Pennsylvania? Get ready for a laidback lifestyle with plenty of amenities to keep you entertained. If you’re planning on relocating within the next few months, turn to the trusted Media movers at Suburban Solutions to get your belongings there without the stress, hassle, or heavy lifting!