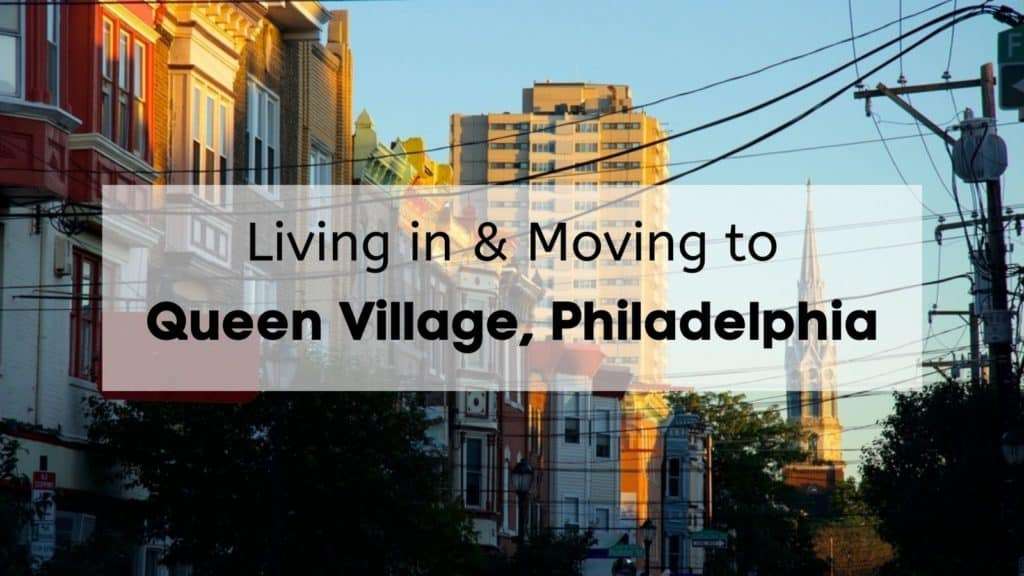 Just south of Center City Philadelphia is the small, historic neighborhood of Queen Village. Though a portion of the neighborhood sits on the National Register of Historic Places, Queen Village has an artsy, modern vibe. Queen Village is a well-known shopping and entertainment destination, as well as one of the most sought-after places to live in Philadelphia. Though it’s a popular place to live, will Queen Village be a good fit for you? Let’s take a look and find out!

Queen Village is Philadelphia’s first and oldest neighborhood. The first European settlers in the area were of Swedish descent. These early colonists arrived decades before the British took control of Queen Village in 1681, when it was granted to William Penn. Completed in 1700, Old Swedes’ Church, located at Christian Street and Columbus Boulevard, is the oldest and best-known building that remains from this time.

By 1830, Queen Village was a bustling area with 20,000 residents, and was known as the epicenter of Philadelphia’s free Black community; almost two-thirds of the Black families in Philadelphia resided in Queen Village. The area continued to grow and diversify, and was so densely populated by the early 20th century that it has been compared to the tenement living conditions of the Lower East Side of Manhattan. Queen Village experienced a downturn after World War II, when many families sought more space and quiet living in the suburbs. The community experienced further decline as I-95 was built in the 1960s. Plans for a Crosstown Expressway, though never realized, caused a further drop in property values.

By the 1970s, renewed interest in Queen Village began with new businesses popping up on South Street and a portion of the neighborhood designated a historic district by the National Register of Historic Places. Today, the South Street commercial area draws shoppers and tourists to its over 300 cafes, shops, and restaurants. Queen Village is not only a vibrant shopping and entertainment district, but one of the city’s most affluent neighborhoods.

Queen Village is located on the eastern edge of Philadelphia. Queen Village is bound by the Society Hill neighborhood to the north, Pennsport to the south, and Bella Vista to the west. Queen Village spans south to north from Lombard Street to Washington Avenue, and east to west from the Delaware River to 6th Street. Queen Village’s zip code is 19147.

Queen Village is densely populated and very walkable. However, you still may need options for getting around! Several SEPTA bus routes pass through the neighborhood, entering from Center City and Washington Avenue. You can catch the 25 bus on Columbus Boulevard, the 40 on South or Lombard Streets, the 57 on 3rd or 4th streets, and the 64 on Washington Avenue. Queen Village also has several spots where you can pick up a bike from Philadelphia’s bike share program, Indego. If you plan on having a car in Queen Village, parking can be a challenge, but there are several lots on Front Street.

Who Lives in Queen Village?

Currently, about 35% of Queen Village households consist of married couples. It’s a younger community, the median age being around 36 years old. Only about 18.3% of households in Queen Village are home to school-aged children.

Things to Do in Queen Village, Places to Eat, and Where to Shop

It’s impossible to get bored in Queen Village! Though it’s small in size, the streets are packed with shopping, entertainment, and dining opportunities.

You could spend the whole day shopping on South Street and still have plenty more to see! If you’re looking for quirky vintage finds, head to Retrospect or The Raxx Vintage Emporium. For unique jewelry, decor, and gifts, head to Eye’s Gallery or Mineralistic. In the spring, South Street plays host to the South Street Spring Festival, one of Philly’s best-known events. Searching for amazing fabrics for your home or wardrobe? Turn down 4th Street and you’ll have dozens of options on Fabric Row.

Once you’ve worked up an appetite, you might have a hard time choosing from among all of Queen Village’s delicious eateries. Queen Village is home to the legendary Famous 4th Street Deli, a Philadelphia landmark. If you’re in the mood for one of Philly’s famous cheesesteaks, head to Jim’s – the line moves quickly, and it’s worth the wait! For more upscale dining, head to Bistrot La Minette for traditional French fare, or Little Fish BYOB for modern Asian cuisine.

In need of family-friendly activities? Head to Spruce Street Harbor Park for an afternoon relaxing on the water, dining, or playing games; on weekends, the park hosts the Art Star Pop Up Market, where artisans sell their handmade merchandise. Kids will love having access to Weccacoe Playground, as will tennis lovers.

If you’re looking for arts and culture, you’ll have plenty of options in Queen Village. Spend a day exploring Philadelphia’s Magic Gardens, or arrange a guided tour of the expansive mosaic. Catch a show at the famous Theater of the Living Arts on South Street. Queen Village is also home to the Independence Seaport Museum, which overlooks the Delaware River.

If you’re considering a move to Philadelphia’s vibrant, historic Queen Village area, make sure to put your relocation in the best hands in Philadelphia. Suburban Solutions is the highest rated professional moving company in Philadelphia – call us today at 610-314-6868 to get your free quote started!