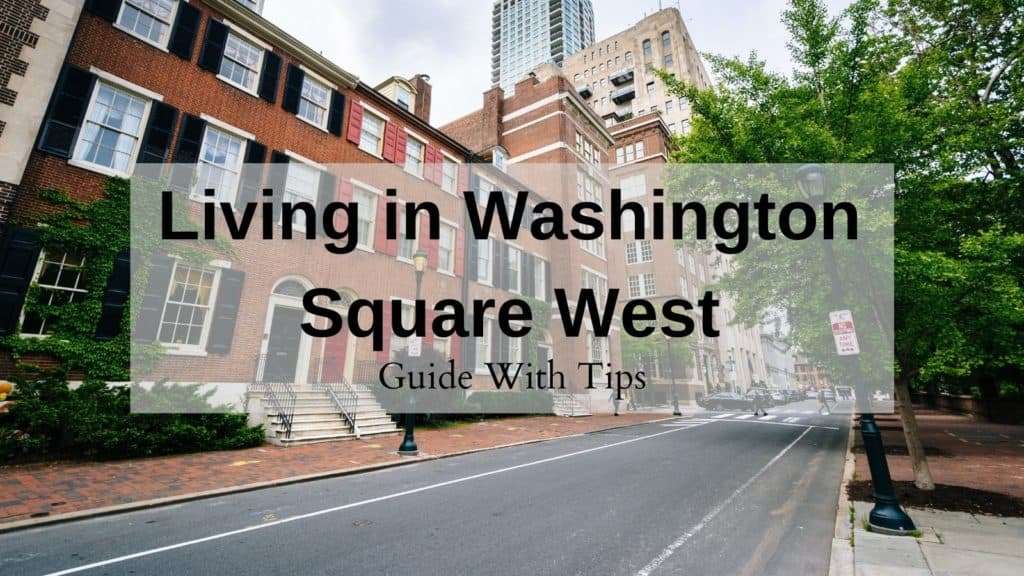 Washington Square West is a lively, welcoming neighborhood in downtown/Center City Philadelphia. Comprising Midtown Village and the Gayborhood, the area takes its name from the square just east of the neighborhood, one of the first public squares in the US.

Washington Square West is not only one of the most conveniently located neighborhoods in Philadelphia, it’s one of the chicest. Its cobblestone streets and historical buildings offer old-world charm as the backdrop for trendy shopping, exquisite cuisine, hip coffee houses, and a buzzing nightlife. That doesn’t mean it’s just for singles though – Washington Square West is extremely popular among young families.

Over the years, attempts have been made to re-brand the area as “Midtown Village,” “Blocks Below Broad,” and “B3,” but none of these names have gained popularity. Those living in Washington Square West refer to the area as “The Gayborhood,” “Center City,” or “Wash West.”

Washington Square West was one of the original five squares laid out by William Penn in the late 17th century and served as a burial ground for soldiers during the Revolutionary War. Washington Square was split into eastern and western quadrants in the late 1950s, when urban planner Edmund Bacon worked to revitalize the area. Unfortunately, funding ran out for the project and Wash West fell into decline. In the 1970s and 80s, as the area began to recover, it served as a red light district and the center of the gay bathhouse culture of Philadelphia. In 1984, the Washington Square West Historic District was added to the National Register of Historic Places.

In the 1990s, Mayor Ed Rendell reinvested funds into Washington Square West, and the neighborhood began to blossom into the thriving community it is today. The area continues to be the epicenter of the Philadelphia LGBTQ+ community and is the first “Gayborhood” in the country (the term was coined by a Philadelphia CityPaper writer in 1992). In April 2007, the city officially recognized the area by adding rainbows, indicating LGBTQ+ pride, to Wash West’s street signs. More rainbows were added in 2010 and in June 2015. Philadelphia is one of only four US cities to recognize its LGBTQ+ communities in this way.

Washington Square West is located in downtown, or Center City, Philadelphia. The Washington Square West community is situated between Walnut Street and famed South Street, and 7th and Broad Streets. Neighboring areas include Independence Mall, Old City, Society Hill, and Rittenhouse Square. Thomas Jefferson University, one of the region’s most respected medical universities, is located one block north of Wash West. Many educational and medical facilities associated with the university are located in the neighborhood, with medical students living in and around the area. Several facilities serving the University of the Arts are situated in Wash West, which accounts for some of the vibrant artistic flair associated with the neighborhood.

Who Lives in Washington Square West?

Currently, Washington Square West comprises over 60% single-person households, with 17% of residents listed as married. Only 6.6% of families in the area have children under the age of 18. However, thanks to the highly rated General George McCall K-8 school, Washington Square West is one of the best Philadelphia neighborhoods for families. Residents of the neighborhood are of younger age, the majority in their late twenties to mid-thirties. Residents consider the area to be very safe and friendly. For this reason, tourists enjoy staying here as well.

Things to Do in Washington Square West, Places to Eat, and Where to Shop

It’s impossible to be bored in Washington Square West! Considered a shopping and dining hotspot, the streets are lined with retail stores, restaurants, and coffee shops for tons of things to do in Washington Square West. Shoppers enjoy strolling Jeweler’s Row with 300 diamond and jewel merchants on Sansom Street between 7th and 8th Streets, and on 8th Street between Chestnut and Walnut Streets. Antiques Row is located on Pine Street between Broad and 9th Streets, where you can find furniture, collectibles, and artwork.

Jeweler’s and Antique Rows aren’t the only attractions Wash West has to offer. Among the many options, Addiction Studios is a high end clothing and accessories consignment boutique. Kin Boutique offers chic, modern clothing accessories, and home items. Check out Duross & Langel for homemade soaps, candles, and skincare products.

The Washington Square West housing market is somewhat competitive. Real estate prices are often higher than similar neighborhoods in Philly, with a median sale price of $384,500. Homes stay on the market around 35 days. Those moving to Washington Square West will find that individual 2- to 4- story row homes (often called “trinities”) and mid-rise condos and apartments make up most of the real estate market in Wash West. Greek architectural details can be found among the historic buildings as well. Those considering moving to Washington Square West can expect to find thick, well-built structures, trinity stairs, and exposed brick walls within Wash West homes.

Washington Square West is considered one of the most expensive neighborhoods for renters in Philadelphia. Median rent for a one bedroom apartment in Wash West is $1445. Rent prices in Philadelphia are going up: prices increased more than 8%.

Moving to Philadelphia? If so, consider the eclectic and vibrant Washington Square neighborhood! When it’s time to change your address, give Suburban Solutions a call. We’re the best Philadelphia moving company, and we’re here to make your move stress-free!