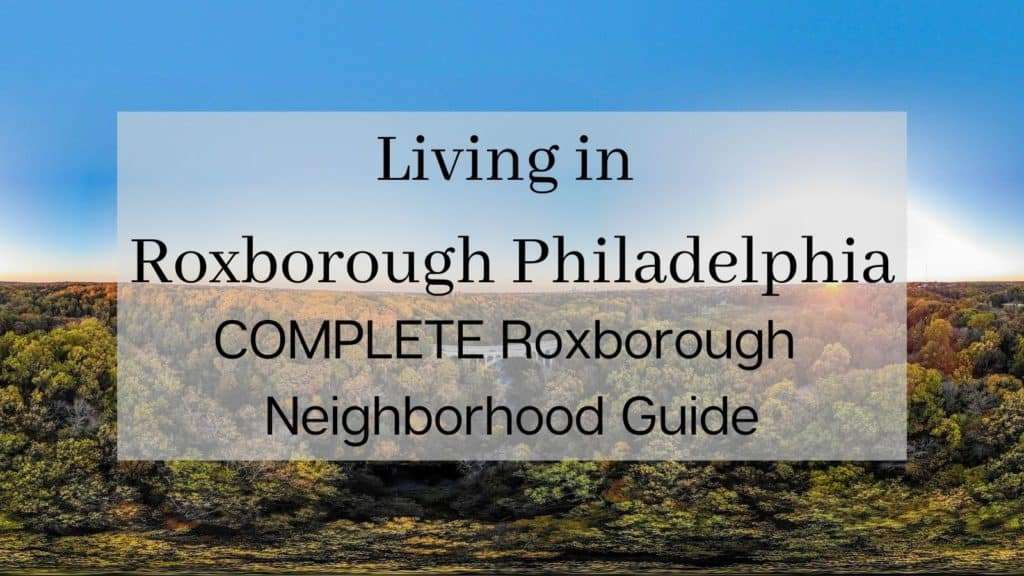 Roxborough is one of Philadelphia’s best-kept secrets. This safe, family-friendly neighborhood, just 11 miles northwest of Center City, is located in the desirable Northwest Philly area close to all of the amenities of the big city but with plenty of green space and attractions. Well-connected to downtown via the SEPTA regional line, you’ll love living in Roxborough, Philadelphia. What is Roxborough, Philadelphia known for? Its walkability, locally owned businesses and restaurants, and historic row homes and townhomes.

Is Roxborough a good neighborhood? Absolutely! Here’s what you’re going to love after moving to Roxborough, Philadelphia.

Roxborough was part of Roxborough Township which was later incorporated into Philadelphia in 1854. In 1683, William Penn sold more than 4,200 acres of land in modern-day Roxborough to 11 people. At the time, the area was known as Manatawna and didn’t become Roxborough until 1707. The first mills and farms were built in the neighborhood in 1682 and they dominated the landscape for over 200 years.

Over a period of 50 years, the original 11 parcels were divided and resold. Eventually, two influential families – the Rittenhouses and Leverings – purchased land and influenced the area’s development. During Roxborough’s early history, German immigrants accounted for most of the population.

In the mid-19th century, Roxborough was home to the wealthiest residents of Philadelphia who owned the Manayunk textile mills. Revenue from these mills helped build the community’s parks, schools, and Roxborough Home for Women. By the early 20th century, however, many tracts of land were owned by large land-holding companies, not families. By 1930, more than half of the neighborhood was still agricultural but this began to shift within a few decades to mostly residential.

Today, Roxborough is a primarily residential community with a population of 31,000.

Roxborough Location & Transportation – How to Get Around

Roxborough is located in Northwest Philadelphia and bordered by Manayunk and the Schuylkill River to the southwest, East Falls to the southeast, and Fairmont Park to the northeast. Most of the neighborhood is in the 21st Ward and zip code 19128 as well as area codes 215, 267, and 445.

The main road through Roxborough is Ridge Avenue, once a Native American trail called Manatawny. The trail was called Ridge Road by the 1700s and became known as The Great Road from Philadelphia to Reading by 1730. The other primary road is Henry Avenue, a four-lane road that runs parallel to Ridge through the entire neighborhood.

Roxborough is a walkable residential area known for its safety and nearby amenities. Roxborough is extremely popular with millennials, young professionals, and families. While millennials are leaving most areas in Philadelphia, Northwest Philly, including Roxborough, remains an exception. Between 2000 and 2012, the millennial population of Roxborough increased from 25% to more than 30%. Roxborough is mostly comprised of homeowners, not renters, with a stable history and plenty of amenities. While neighboring Manayunk attracts millennials attending college and renting, many choose to stay in the area and buy in Roxborough when they’re ready for a home of their own.

Safety has also played a big role in attracting families and millennials to the area. Roxborough has long ranked as the safest neighborhood in Philadelphia with very little violent crime. Families appreciate that day-to-day needs are easy to meet while living in Roxborough with grocery stores and other amenities close at hand. The neighborhood’s elementary schools are also very well regarded.

Families can also appreciate the expansive green space in Roxborough. Take your morning jog along Wissahickon Creek or along the trails in Wissahickon Valley Park. Take the kids or dog to one of the neighborhood’s many smaller parks with playgrounds and ball fields. Enjoy casual eateries along Ridge Avenue or stop over in Manayunk for the trendy brewpubs and bars. With Ridge Avenue cutting the neighborhood in half, most people living in Roxborough can walk to the main street to shop and grab a bite to eat.

Overall, you’ll get less of an urban or city vibe after moving to Roxborough and a greater sense of community with plenty of nature.

Shopping, Restaurants & Things to Do in Roxborough, Philadelphia

While Roxborough is mainly a residential neighborhood, you’ll find plenty of things to see and do. The neighborhood has two main thoroughfares with shopping and restaurants: Ridge Avenue and Henry Avenue. The Andorra Shopping Center is located in the neighborhood near Ridge Avenue with a gym, restaurants, and shops. The Ivyridge Shopping Center is an outlet mall with retailers like Target  CVS, and Pet Valu. You’ll also find other convenient shopping options like Bakers Centre and ShopRite of Roxborough, a popular supermarket chain.

What is there to do in Roxborough, Philadelphia? Plenty! The Roxborough YMCA offers a fitness center, basketball, an indoor pool, and a KidZone with programs and classes for kids to enjoy for up to 2 hours. There are also two rec centers nearby with outdoor pools free to Philadelphia residents. The Wissahickon Valley Park that runs along the neighborhood is one of the best perks of living in Roxborough, Philadelphia with more than 50 miles of trails for biking, hiking, and horseback riding. It’s absolutely one of the best things to do in Roxborough with kids on a sunny day. There’s even a creek stocked with trout! Within the park is the Walnut Lane Golf Club, a beautiful tree-lined 18-hole city golf course and practice facility.

Interested in the best places to eat after moving to Roxborough, Philadelphia? There’s plenty to enjoy! One of the hallmarks of Roxborough is Roma Pizza, a casual pizzeria with white and traditional pies, hoagies, and steak sandwiches. Hilltown Tavern is a great place to relax with friends. This laid-back tavern serves up burgers and classic pub food with sports and outdoor seating. When you’re in the mood for Greek food, be sure to try Yiro Yiro which offers authentic and customizable gyros made with meat slow-roasted in Greek spices and wrapped in fluffy pita. There’s even a self-serve Greek yogurt bar, flaky baklava, and loukoumades with Nutella.

Here’s where to find these Roxborough attractions and activities:

Many popular neighborhoods around Center City have skyrocketed in price over the last decade or so. Roxborough’s row homes and townhomes homes have remained a good value with more Roxborough real estate on the market now than 20 years ago. For years, residents moved to the neighborhood and rarely left, passing down homes to the next generation.

You’ll find options for both buying and renting after moving to Roxborough, Philadelphia. The average rent in Roxborough is about $1,380, lower than average for Philadelphia but far from the cheapest place to live in the city. There are several apartment buildings in Roxborough such as Ridgeview Apartments, an upscale apartment building with two-bedroom units starting at $1,400, the more affordable Ridge Court Apartments, and Dupont Towers.

Have you settled on Roxborough as the neighborhood for you? If this beautiful Philadelphia neighborhood is calling your name, call the trusted Philadelphia movers at Suburban Solutions today to request your free moving estimate to get started.