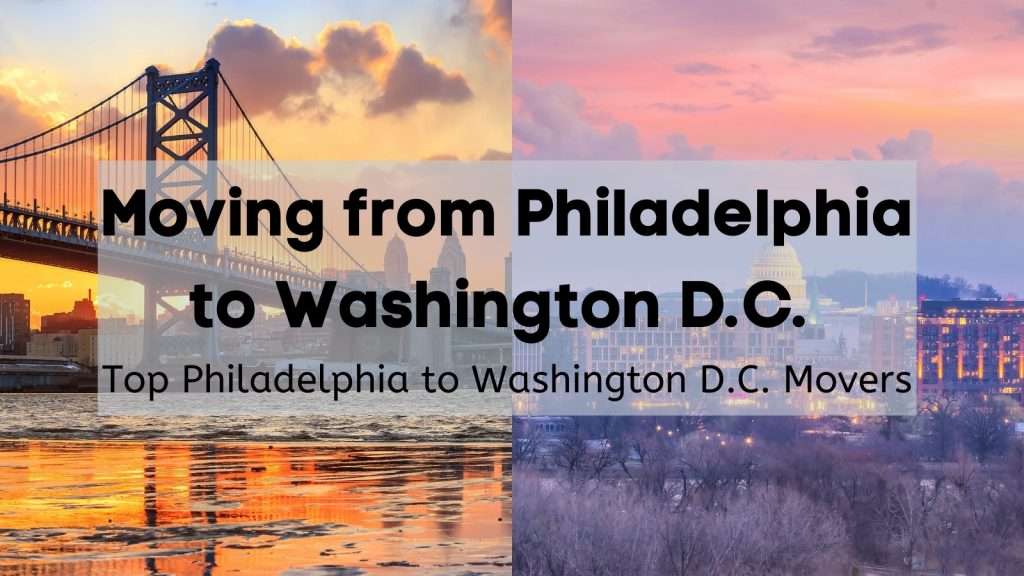 There are numerous reasons why you might consider moving from Philadelphia to Washington D.C. For instance, perhaps you desire new scenery and climate, got accepted into a specific college or university, received a new job opportunity, want to get married, or just want to be closer to family. Whatever the case may be, we understand that relocation requires a lot of big changes which isn’t always an easy transition. However, this doesn’t mean it has to be a hair-tearing process.

Luckily for you, this exciting new time of your life can be much easier if you hire a team of reliable Philadelphia to Washington D.C. movers to deal with all the hard work. Instead of attempting a DIY move, working with an experienced crew will save you tons of time, prevent back and muscle aches, and allow you to have peace of mind.

As the capital city of the United States, the charming city of Washington D.C., also known as the Washington, District of Columbia, is swarming with reasons why people want to make it their new home.

Moving from Philadelphia to Washington D.C. — What You Need to Know

According to the Economic Policy Institute, a family of four living in the Philadelphia/Camden/Wilmington metro area should be making $94,592 to live the most comfortably.

The overall crime in Philadelphia scores a C+ on CrimeGrade. This means the rate of crime is slightly higher than the national average.

If you’re interested in buying a home, the median house prices in Philadelphia come in at $270,000 on Redfin.

Philadelphia experiences a humid continental climate where the summers are warm and humid with highs of 87°F and the winters are cold and snowy with lows of 26°F.

A family of four should be making an annual $109,540 to live the most comfortably in the Washington, DC metro area according to the Economic Policy Institute.

Unlike Philadelphia, Washington D.C. has a solid C safety score on CrimeGrade. According to the FBI, the District of Columbia has a crime rate of 5,223 per 100k residents which gives you a 1 in 19 chance of being a victim of crime. The city is protected by all 3,809 sworn officers of the Metropolitan Police Department of the District of Columbia.

Washington D.C. is within a humid subtropical climate zone with warm, humid summers with highs of 89°F and cold, snowy winters with lows of 27°F. The most pleasant months in Washington, District of Columbia are May, September, and October.

As the nation’s Capital, the cost of living in Washington D.C. is 39% higher than the national average. However, the living cost can vary based on the specific real estate and average salary in the area you choose. Washington D.C. has a corporate income tax rate of 8.25% and a 6% sales tax rate.

Washington, District of Columbia was founded on July 16th, 1790 by the Constitution of the United States to serve as the nation’s capital. But being the federal district home to political leadership and important government buildings like the White House and the U.S. Capitol isn’t the only dazzler this world-famous city has to offer.

The lively and diverse district of Washington D.C. boasts an endless amount of fun things to do and places to go– many of which are historical and cultural attractions recognized across the globe. Some of these include the iconic Lincoln Memorial, Washington Monument, and World War II Memorial for U.S. history insight. A few more places to visit in Washington, District of Columbia are the National Gallery of Art, Smithsonian National Air and Space Museum, the Smithsonian National Zoological Park for learning and observing, the United States Botanic Garden for exercise and exploration, the Shops at Dakota Crossing for shopping.

Two LSA alumni are plating their love of art, sustainability, and science at the United States Botanic Garden on the National Mall. 🎨 🌱 🔬 https://t.co/NB8jt9YurG #LSAvictors #umichARTS pic.twitter.com/7Rqp8i3DfG

As one of the top 10 most visited cities in the nation, you’ll find an abundance of art, activism, ample job opportunities, free activities and events, public service, and entrepreneurship while living in Washington D.C. For these reasons, Washington, D.C. is especially attractive for millennials, families, and those seeking governmental careers.

For exploring the attractions, the best way to get around Washington D.C. is by foot. However, the DC Metro is the easiest and fastest way for day-to-day use. D.C. is ranked with the 4th best public transportation system in the nation by U.S News. The transit system in D.C. is operated by Washington Metropolitan Area Transit Authority. On top of that, it’s one of the most bike-friendly cities in the country.

Your little ones will be attending District of Columbia Public Schools whereas a few of the universities in the city are Georgetown University in Washington DC and American University, in Washington, D.C.

When you hire an experienced Philadelphia to Washington D.C. long distance moving company, you’ll save a lot of time and energy. Consider hiring the following services:

Why Suburban Moving is Your Best Philadelphia to Washington D.C. Moving Company Choice

There’s plenty of research required before choosing from long-distance moving companies for your interstate relocation from Philadelphia to Washington D.C. You can start by asking the following questions to you company of choice:

Ensure that the right equipment and employees will be present when your company of choice shows up for the job.

Suburban Moving is the best long-distance mover in the region because we always show up with the necessary supplies, equipment, and professional crew as mentioned above.

To start, we’ll perform a virtual or in-home walk-through at your property. From there, we can ensure you receive the most accurate estimate that fits your budget.

You can head on down to Washington D.C as soon as we’ve picked up all your items from Philadelphia! Your best options for transportation are to drive, fly, or take a train.

Driving from Philadelphia to Washington D.C.

Washington D.C. is about 140 miles away from Philadelphia. If there isn’t any traffic and you drive the average speed limit, you can get to Washington D.C. in just three hours while the fastest route is taking I-95 S.

During your drive, you can stop at Hollywood Casino Perryville, Susquehanna State Park, and Fort McHenry National Monument and Historic Shrine on the way there.

Flying from Philadelphia to Washington D.C.

Traveling from Philadelphia to Washington D.C. by Train

Thinking about moving to Washington D.C.? Our professional company will give you a convenient and hassle-free relocation! Reach out to Suburban Moving at 301-928-8669 for an accurate moving estimate!