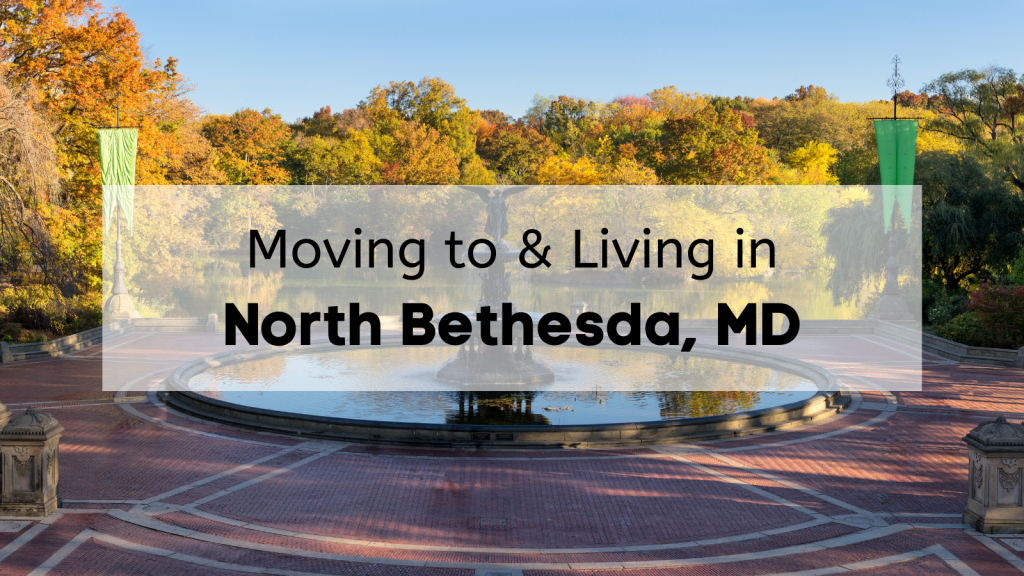 North Bethesda, MD, is a small unincorporated and census-designated area within Montgomery County, and the region as a whole is known for its Neo-Georgian architecture and as the ​​”North Bethesda’s Urban Core.”

North Bethesda is the headquarters for four of the National Institutes of Health. Along with the Nuclear Regulatory Commission, United States Public Health Service Commissioned Corps, and the Health Resources and Service Administration.

North Bethesda is the number one place to live in Maryland. If you’re looking for a nice place to settle down, you should consider the beautiful area of North Bethesda. There is a mixture of suburban and urban lifestyles, so it’s perfect for everyone.

Where Is North Bethesda?

With picturesque scenery and modern urban amenities, North Bethesda, MD, is a great place to settle down and start a family.

Located 11.5 miles from Washington D.C., North Bethesda is near the city of Rockville and another unincorporated census-designated area called Potomac. While the land is mainly flat in this area, there are counties that are nearby with mountains to go snowboarding.

If you don’t have a car, don’t worry because there is a reliable public transportation system. Through the North Bethesda Transporation Center, you have options to ride the bus, Metrobus, Metrorail, and express bus.

The population in North Bethesda, MD, is 49,719, and it has increased year-over-year. While the region isn’t a large city within the state of Maryland or the United States, it’s still the best place to plant your roots.

One of the most notable heritage in North Bethesda is the following:

Grosvenor Family: In the 17th century, the southern edge of North Bethesda was the country estate for the Duke of Westminster of England.

For the demographics of North Bethesda, here is a breakdown:

In North Bethesda, Maryland, the total crime rate is lower than the national average by 63%. As such, this is one of the safest places to live in the United States.

The Montgomery County Department of Police is in charge of serving and protecting this community, and there are a total of 6 districts throughout the county.

Cost of Living in North Bethesda

While the cost of living in North Bethesda is higher than the national average by 43%, it is still an affordable option compared to other major cities nearby like Washington D.C.

The Economic Policy Institute recommends that a family of four have an annual income of $104,098 to live comfortably. Click here to use the calculator to find out more information before making your final decision to relocate.

Numbeo gives a good outline of what you could expect to be paying for everyday items. Here are the estimated living expenses based on Bethesda, MD, the closest city available.

We understand that purchasing a piece of property isn’t on everyone’s to-do list, and that’s okay. According to RentCafe, you can expect your rent to be between $1,542 to $3,477+ depending on the bedrooms, bathroom, amenities, and location.

Here are two of the best neighborhoods to consider moving to in North Bethesda:

This family-friendly neighborhood is close to the heart of the city, local shopping centers, and outdoor activities. When living in Old Farm, you will be close to pools, sports courts, parks, and local exercise classes.

In Maryland, you can expect the summers to be hot and humid, with the median temperature from June through August being around 85 degrees.

Winters are cold, windy, and full of snow, all of which Maryland is known for having. The daytime temperatures range from 42 to 46 degrees during the winter, but there are moments when the temperatures can fluctuate from that range.

On average, around four tornadoes throughout Maryland happen during the year. North Bethesda is above the national average for rainfall at 35.3 inches, and is sitting at 19.3 inches for snowfall.

If you’re looking for the best time to visit North Bethesda, it’s recommended in the summer time around July because there are a wide variety of events happening in the area.

Things to Do in North Bethesda

If you’re looking for individual stores to check out, here are some of them: Scout & Molly’s North Bethesda, REI, UNIQLO Pike and Rose, and L.L. Bean.

There are so many fun activities that you can do throughout the year at Cabin John Regional Park. Everything from art in the park, playing hockey, having a picnic, playing tennis (both indoor and outdoor options), soccer, practicing ice skating, watching your kids on the playground, or throwing the ball for your dog in the designated area.

A Game of Rooms Rockville

A Game of Rooms is one of the best-known escape rooms that will have you on your feet, and it’s a fun activity for the entire family. With three different options: detention, prison, or cabin fever, which room will you choose?

Imagination Stage is on a mission to encourage everyone to find their voice through the beautiful art of performing. They host theater performances throughout the year and even have camps that your kids can attend.

Are you looking for more fun activities to do in North Bethesda? Montgomery County has plenty of beautiful parks for you to check out. There are also events throughout the city that you should check out. Click here for the schedule.

Food is everything. It’s often one of the categories people consider before moving to a new city or state. Here are some of the best dining options in North Bethesda!

The menu changes with the season, so you only receive fresh foods. Your meal will get cooked on an oak-fire grill and brick oven. Everything will be full of flavor and perfectly created.

Whether you’re looking for something fancy like steak and shrimp, or something laid back like a cheeseburger and fries, you can find it all at City Perch Kitchen + Bar.

Homemade food from scratch mixed with bowling or bocce is everything you desire for a great time when going out with friends or family members to make memories.

The top three employers in North Bethesda, MD, are Marriott International, Lockheed Martin, and the National Institutes of Health.

While North Bethesda isn’t on the Payscale website, we wanted to share the average base salary from Bethesda, which is a similar town that is only 4.8 miles away. You can expect to make around $78,000 per year or $24.53 per hour.

On Indeed, you can find 100k+ jobs within a 25 miles radius of North Bethesda, Maryland, but if you want to find a career with the Montgomery County Government, click here to see what positions are available.

North Bethesda, Maryland, is part of the Montgomery County Public Schools District. These schools are some of the best in the state of Maryland. Here are a few options within North Bethesda:

If you plan on attending college, you have plenty of incredible universities nearby. A couple of examples include: the University of the District of Columbia, Potomac College Washington, Georgetown University, and the University of Maryland.

While North Bethesda doesn’t have a library within their designated range, David Library is 2 miles away.

North Bethesda, MD, is a family-friendly and safe area that is perfect for anyone. If you’re interested in moving to North Bethesda, Suburban Moving is here for you! As a highly-rated team of professionals, we have the necessary experience to make this transition seamless. Call us at (301) 928-8669 for a free estimate!