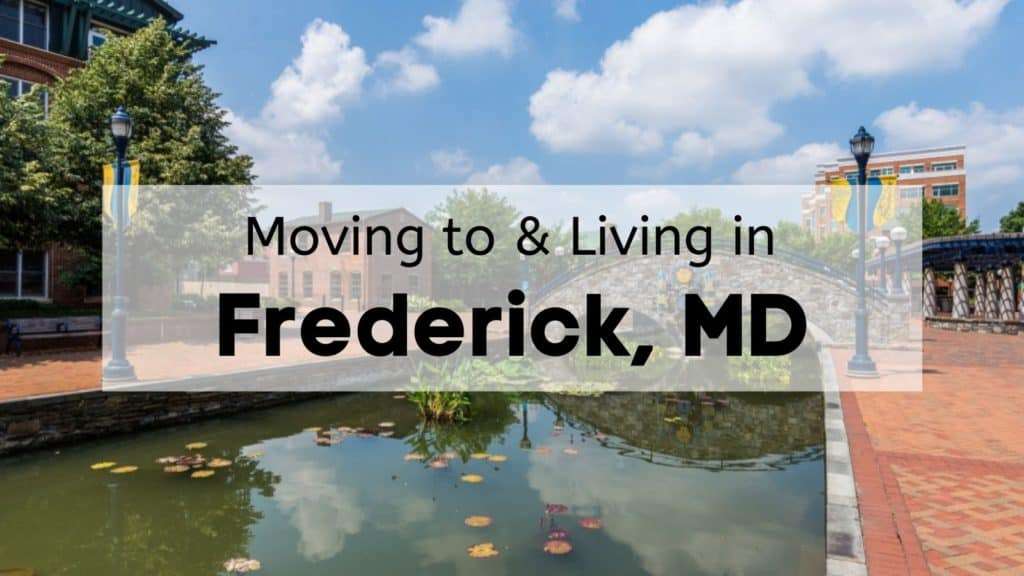 Located within an hour’s drive of Baltimore and Washington D.C. is the historic city of Frederick. Founded in 1748, Frederick is known for its civil war history and its 40-block historic district, making the city a true tapestry of American heritage. Frederick was also home to the Star Spangled Banner author, Francis Scott Key and had multiple visits from Abraham Lincoln, Benjamin Franklin, George Washington, and Robert E. Lee. While many history buffs love the city, many people move to Frederick for a variety of reasons, including the diverse atmosphere, the lively nightlife, the awesome public schools, and the friendly environment ideal for kids of all ages. Crime rates in Frederick are 9% lower than the national average, so many are moving to Frederick for the safe environment! With plenty of things to do and sights to see, Frederick MD indeed is a great place to live!

Utilities in Frederick are 8% cheaper than the Maryland average and transportation is 21% less expensive than the rest of Maryland! Healthcare in Frederick is 10% less costly than the national average. For other common items, you can expect to see these prices:

Trying to find the perfect neighborhood can be stressful, which is why we found several different neighborhoods in Frederick for you to check out, so you will be able to find the home that will fit all your needs. The most popular neighborhoods in Frederick are Downtown Frederick, Baker Park, Worman’s Mill, and Tuscarora Creek. Downtown Frederick  is located in the heart of Frederick and offers its residents a lively nightlife. Since there are several things to do in the Downtown area, this neighborhood has a limited number of homes and apartments built there, making the properties more expensive. Downtown Frederick has many different unique designs and sizes of houses, so you’ll likely find one you’ll love. Baker Park is one of Frederick’s most beautiful neighborhoods with houses surrounding the stunning 58-acre park that is filled with jogging and bike paths, playgrounds, and a scenic lake. Worman’s Mill is a brand new neighborhood in Frederick that features many amenities, including a community gathering place, fine retail and dining, and a variety of different beauty services. Tuscarora Creek is a great affordable option for couples that are looking to buy their first home. This neighborhood is far from the downtown area, so Tuscarora Creek offers its residents a dense suburban feel with highly rated schools in the area.

Things to Do in Frederick, MD

Looking to get out and about Frederick, MD? We’ve discovered the top-rated activities in Frederick for you to try out below:

There are several parks to visit in Frederick, but Carroll Creek takes the cake on being the most beautiful to visit. Spanning more than a mile through the heart of Downtown Frederick, visitors can walk along the brick footpaths to a variety of unique shops to look at and buy from. This is one of the best things to do in Frederick for families.

If you’re looking to head outdoors, Gambrill State Park is an awesome place to visit. With over 15 trails in the park, you can walk, run, or bike to stunning views of the surrounding city. You can also reserve camping areas in the park that have picnics and fire pits that allow you to have a fun night out with your buddies or your family!

There are plenty of convenient shopping places in Frederick, including The Shops at Monocacy, Frederick Shopping Center, and Everedy Square & Shab Row.

Additional Things To Do Near Frederick

Frederick has over 90 parks. Explore them on the Frederick Parks & Recreation page.

Explore more things to do, places to see, and beyond with this map of Frederick.

The good news is that there are tons of amazing restaurants in Frederick to try! Whether you want something healthy or a classic seafood dish, check out these top-rated Frederick restaurants:

If you’re looking for some healthy options in the Frederick area, then Cafe Nola is the perfect place for you. Everything is made with organic ingredients to ensure the best quality of dishes. Some of the customer’s favorites are Buffalo Cauliflower, Calamari, Wings, Italian Benedict, and Croissant Sandwich. There are also plenty of vegetarian and gluten free options, making Cafe Nola an allergy friendly restaurant.

This local restaurant offers a variety of tasty American dishes alongside some classic seafood items. Some of their most popular items on their menu include the French Onion Soup, Crab Imperial, Atlantic Salmon, Steak and Crab Cake, and the Chicken Parmesan Over Pasta. There is even a bar located in the basement of the restaurant called Dutch’s Dungeon where many unique drinks are served along with other appetizers, making it a great place to stop by for a night out!

The median household salary for residents in Frederick is $72,088. There are currently 37,428 people working in Frederick. Those moving to Frederick can expect to work in the largest industries in Frederick, which are healthcare and social assistance, professional services, and retail. The highest paying jobs in Frederick are in public administration, technical services, and management of companies. The average commute time for Frederick residents is 29.9 minutes, which is 4 minutes longer than the US average. Many people either work in Frederick or they travel to a bigger city like Baltimore for other great job opportunities. If you’re planning to commute to Baltimore for your job, you can find directions from Frederick, MD to Baltimore, MD here, which is 53 minutes away.

If you’re moving to Frederick with kids, the good news is that the school district is amazing! The most popular schools in Frederick are Urbana Elementary School, Centerville Elementary School, Gov. Thomas Johnson Middle School, and Linganore High School. All of these schools are highly rated for their diverse atmosphere and academic accomplishment. There are also plenty of great private schools to choose from, including Maranatha Christian School, Jefferson School at Way Station, and The Goddard School. Any of these private schools are great options for students that need extra one-on-one time with their teachers and who feel more comfortable in a smaller class setting. Kids will also enjoy access to the free Frederick Public Library.

We understand the unique challenges that come with relocating, which is why we are here to do it for you! Book our leading Frederick moving company today to help get you settled in your new home in no time! Call Suburban Solutions at 301-928-8669 for a free quote!