Living in Bethesda MD (2022) | Is Moving to Bethesda RIGHT For You?

Located in Montgomery County, Maryland just 7 miles outside Washington, D.C., Bethesda is one of the most beautiful and unique communities in the region. Known for its affluence and natural beauty, Bethesda is named for the Pool of Bethesda in Jerusalem. Bethesda is known for the National Institutes of Health and National Naval Medical Center but it has so much more to offer, including amazing education opportunities, an exciting urban center, and close-knit, family-friendly neighborhoods.

Thinking about moving to Bethesda, MD? This complete guide will cover everything you should know about living in Bethesda from its cost of living and weather to jobs to help you decide if it’s the right choice for you.

Bethesda, MD Demographics – Getting to Know Your New Neighbors

The Bethesda population is 63,000 yet it’s not actually a city but an unincorporated community in Montgomery County, Maryland. Bethesda is in the 301 and 240 area codes. Because it’s unincorporated, it doesn’t have defined boundaries and falls into zip codes 20800 to 20899. For over a century, Bethesda was little more than a crossroads village outside Washington, D.C. but farmland gave way to subdivisions at the end of the 19th century and the community became known for its mansions, one of which was home to the Norwegian Royal Family in exile.

Today, Bethesda is about 86% white, 8% Asian, 3% African-American or black, and 5% Hispanic. Curious about the neighbors you’ll meet living in Bethesda, MD? Bethesda is a very affluent community with highly educated residents. In fact, it’s the best-educated city in the country with at least 50,000 people! Almost 80% of residents have at least a bachelor’s degree. Bethesda residents also care about staying healthy; it was ranked as the healthiest place for women in the U.S. by Self magazine. The median household income in Bethesda is $155,000. The community has a very high safety rating too; the Bethesda crime rate is far below the national and Maryland average.

Want to know what to expect from the weather after moving to Bethesda? The community doesn’t get too much snow and it gets 197 sunny days per year, slightly below the national average, but you’ll get an average of 43 inches of rain per year. Make sure you invest in a good raincoat and umbrella!

Bethesda weather is usually pleasant without extreme heat in the summers and average July temperatures in the high 80s. In January, it’s usually in the 20s. 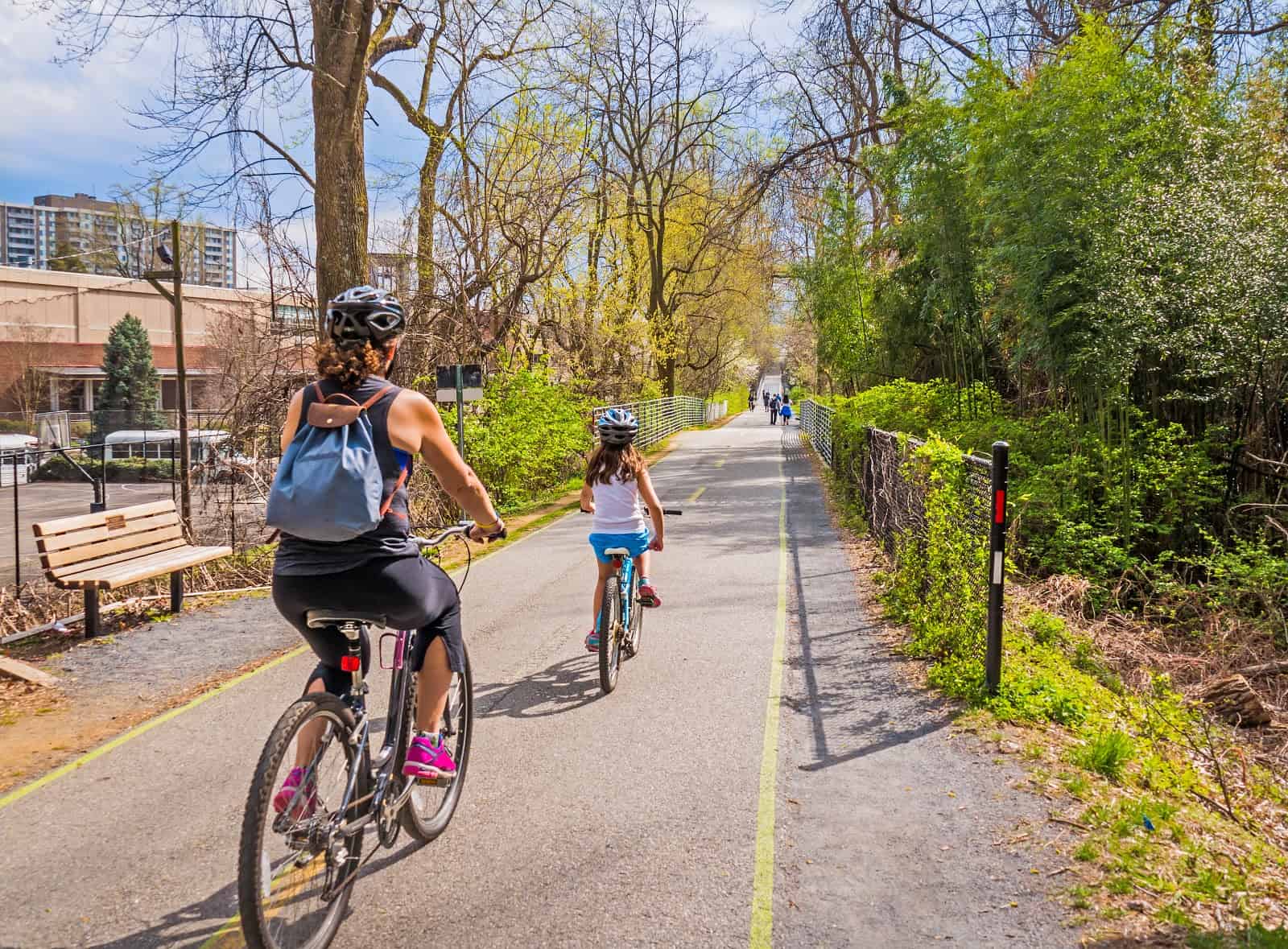 Bethesda is known for its very diverse and strong economy focusing on healthcare, defense, software, and finance.

Bethesda is best known as the site of the National Institutes of Health campus and Walter Reed National Military Research Center plus other military research and medical centers. It’s the headquarters for Lockheed Martin, a defense conglomerate, Marriott International, and Coventry Health Care, a managed health care company.

Many top employers in Bethesda have been ranked as the best workplaces in the U.S. such as real estate financing firm Walker & Dunlop and Digital Management.

Ready to explore employment opportunities in finance, defense, healthcare, or some other sector? Start your search online for jobs in Bethesda, MD on Indeed and SimplyHired. You can also look for employment in D.C. which is just 7 miles away. Here’s what the commute from Bethesda, MD to Washington DC looks like.

Bethesda is served by dozens of elementary, middle, and high schools within Montgomery County Public Schools, many of which are among the best-rated schools in the region and far exceed the state average in terms of college readiness and test scores.

Bethesda is also home to almost two dozen private schools such as Georgetown Preparatory School, one of the country’s most expensive boarding schools, and Landon School, a historic nonsectarian college prep school for boys and girls. You’ll find many Catholic and nonsectarian private school options as well as Sidwell Friends School, a Quaker school that’s educated the kids of Presidents Obama, Roosevelt, Nixon, and Clinton.

While there aren’t any higher education facilities in Bethesda aside from the Uniformed Services University of the Health Sciences, you’ll find many options in nearby Washington, D.C. like Howard University and Potomac College.

Ready to explore the best places to live in Bethesda? Before moving to Bethesda, you’ll want an idea of the right neighborhood for your budget and lifestyle. Here are a few of Bethesda’s most popular communities.

While “affordable” has a different meaning in Bethesda, there are some fairly affordable Bethesda neighborhoods to explore too. Parkview is one of the most notable family-friendly neighborhoods in Bethesda where you can find homes under $700k. Most of the homes are split levels and ramblers built in the 1950s. 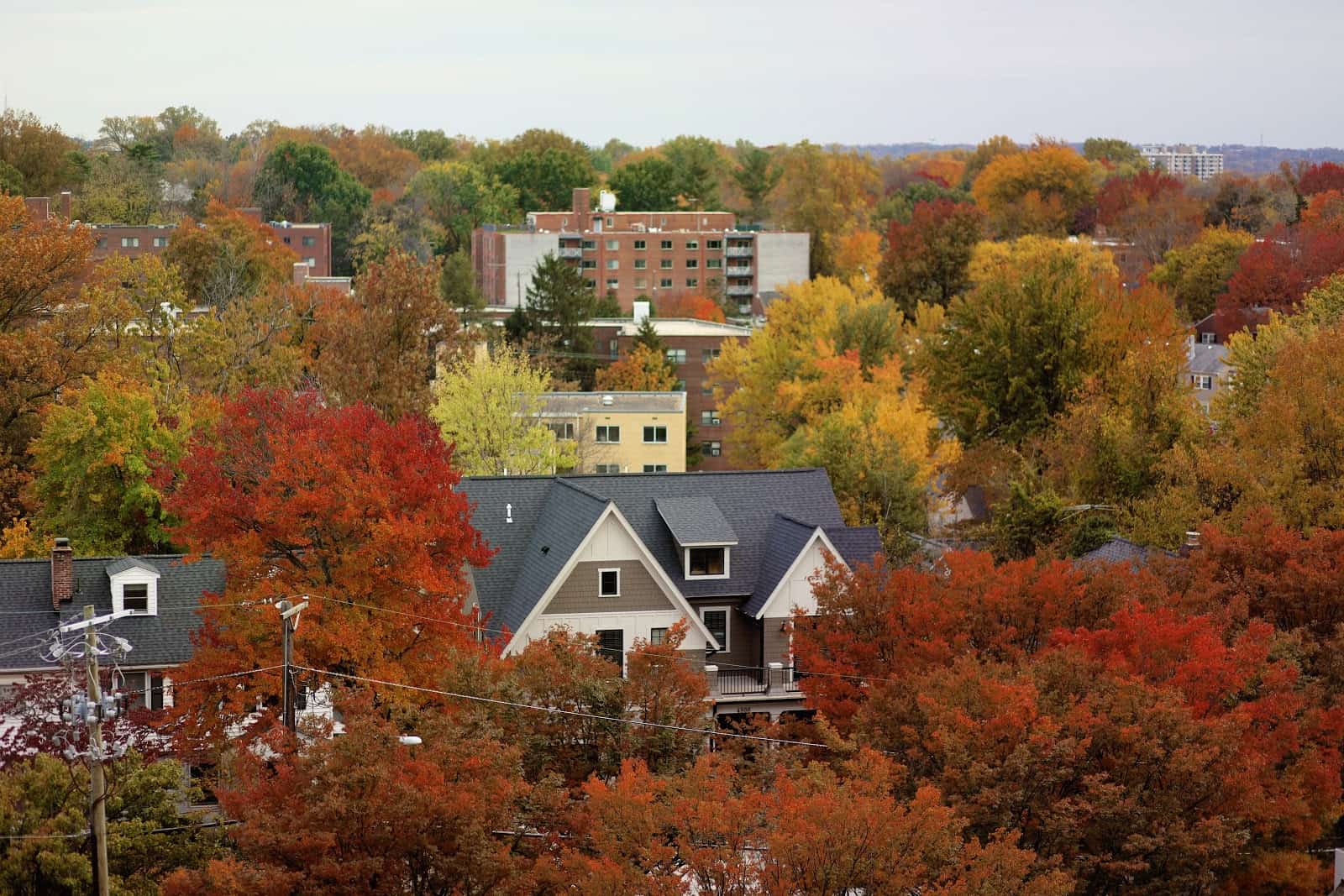 One of the most desirable Bethesda neighborhoods is Fort Sumner, a mature community named after the Civil War fort with tree-lined streets and frequent block parties. Expect to pay up to $1 million or more to buy into this neighborhood.

Mohican Hills is another coveted neighborhood in Bethesda with fewer than 300 homes. This close-knit community features historic Victorian and bungalow homes, new arts and crafts homes, and some new luxury properties and it’s right next to the Potomac River. It’s also one of the most expensive neighborhoods in Bethesda.

What is the Cost of Living in Bethesda?

You can get a good idea of the Bethesda cost of living by looking at housing costs. The median home value in Bethesda, MD is $877,000. That’s enough to get you a 5-bedroom, 3-bath home in the right neighborhood and compares to the U.S. median of $227,000. You can search for Bethesda, MD homes for sale to get an idea of what your budget will buy.

Considering renting while living in Bethesda? The average rent in Bethesda is $2,400 for 916 square feet, according to RentCafe. That’s about in line with Washington, D.C.

Top Restaurants & Best Things to Do in Bethesda, MD

Spend sunny afternoons at one of Bethesda’s most popular parks. The park has plenty of ball parks and courts with summer-time indoor ice skating at the Cabin John Ice Rink! There’s also a great playground for kids and miles of hiking trails.

Looking for an idea for things to do in Bethesda on a date or special occasion? Woodmont Grill is a local favorite with live jazz every night and upscale American cuisine.

Enjoy authentic Mexican street fare at Gringos & Mariachis, one of the best restaurants in Bethesda, MD! Be sure to pair your tacos and tortas with sangria, whiskey, or mezcal.

Tips for Living in Bethesda

Set on moving to Bethesda and ready to start the adventure of living in a new city? Trust the dependable Bethesda movers at Suburban Solutions for stellar customer care and unbeatable rates!