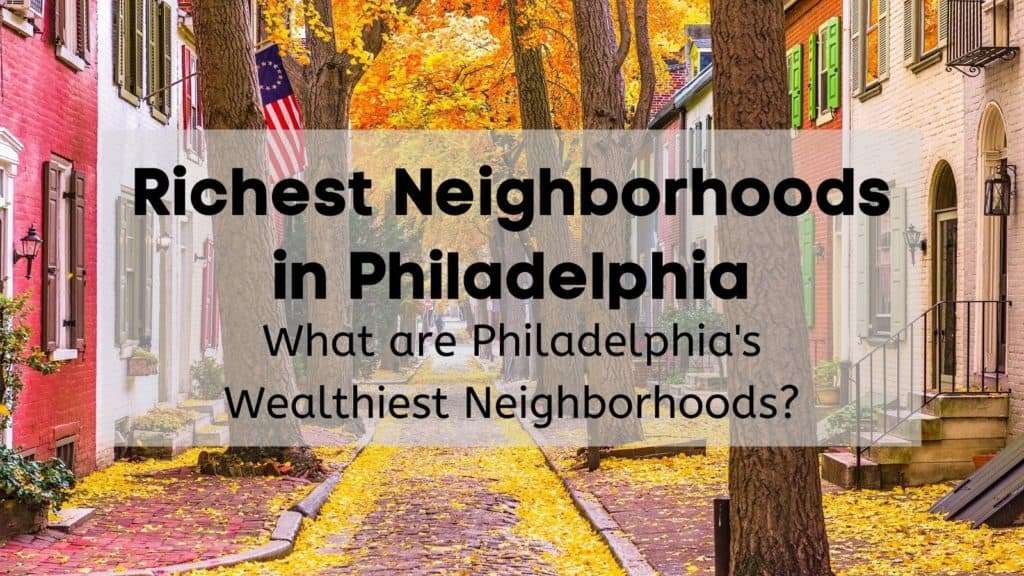 One place to start is the city’s most affluent areas. You’ll find not only low crime rates but historic sites, charming village squares, beautiful architecture, and the city’s best amenities.

What are the richest neighborhoods in Philadelphia? Here are the top 10 wealthiest areas of Philly to explore, each with something unique to offer. It may help to keep in mind Philly’s median household income of $47,500 and median home price of $272,000 to see how these communities compare.

Graduate Hill is located in one of the richest areas of Philadelphia: the South Philadelphia area bordering Center City, Rittenhouse Square, and Fitler Square – the latter two also on this list. Named for a hospital that’s been closed for over 10 years, the neighborhood is sometimes called Southwest City Center or South of South (SoSo). Today, Graduate Hospital is one of the most affluent Philadelphia neighborhoods and popular with millennials and families that commute to Center City.

Despite being part of downtown and walking distance to Center City and the busy Rittenhouse Square, Graduate Hill has a family-friendly, suburban atmosphere. You’ll find a mix of large, luxury homes, condos, and townhomes.

A Fitler Square household earning $222,000 is in the 80th percentile, far above $86,600 for Philadelphia. The neighborhood has Philadelphia’s wealthiest 5%: the top 5% of households have a mean income of $1,037,000. Fitler Square is certainly one of the richest neighborhoods in Philadelphia, even beating out Graduate Hospital, although its small size mean it doesn’t get as much attention.

Fitler Square is located on the Schuylkill River next to Graduate Hospital, Rittenhouse Square, and City Center West, just across from the University of Pennsylvania.

Residents call Fitler Square an urban village thanks to its community feel and fun social scene. This quiet, residential neighborhood feels far removed from the busy city life with plenty of green space, luxury brick townhomes, art installations, fountains, and its iconic bronze turtle statues. The neighborhood is anchored by the namesake Fitler Square and the Schuylkill River Park with a pool, playground, dog run, and water views.

Chestnut Hill has historically been one of the wealthiest neighborhoods in Philadelphia. A Chestnut Hill household earning $208,500 is in the 80th percentile and the top 5% of households have a mean income of $770,900.

Located in Northwest Philadelphia, Chestnut Hill is known for its tree-lined streets, private schools, and gorgeous architecture with historic mansions and charming brick Victorian townhomes. It’s known as the garden district thanks to the Morris Arboretum and its canopy walk 50 feet over the ground. The real estate market is unique: unlike most rich areas of Philadelphia, you’ll find a mix of housing options for different incomes. Closer to the park are large homes starting at around $1 million but more affordable row homes and twins are on the west and east sides of Germantown Avenue. These homes were once “worker” housing.

Society Hill – One of the Most Picturesque of Affluent Philadelphia Neighborhoods

Located next to Queen Village and Old City on the Delaware River, Society Hill is one of Center City’s most historic neighborhoods. It’s also one of the richest neighborhoods to live in Philadelphia with median household income approaching six figures. A Society Hill household earning $220,000 is in the 80th percentile and over half of households earning $100,000 or more. The top 5% of households have a mean income of $953,900 – the second-highest top 5% in the city.

During the early days of the American colonies, Society Hill was one of the most populous neighborhoods and it still has a unique colonial vibe with cobblestone streets, brick sidewalks, and a thriving waterfront district along Penn’s Landing with outdoor venues, community events, and entertainment.

Society Hill is one of the most sought-after and picturesque of the wealthiest Philadelphia neighborhoods with plenty of landmarks like Washington Square and the Athenaeum of Philadelphia.

Old City is Philadelphia’s most historic city. It was here in Independence Hall that the Founding Fathers met and formed the United States of America by drafting the Declaration of Independence. it’s also home to Elfreth’s Alley, the oldest continually inhabited street in the country. The neighborhood is next to Penn’s Landing where William Penn landed for the first time and, with other Quakers, designed Philadelphia with its famous grid system starting with the Old City area.

History isn’t all Old City has to offer. The neighborhood boasts a fun nightlife, regular community events, and a walkable layout. It’s also one of the most sought-after rich neighborhoods in Philadelphia. Households earning $142,600 are in the 80th percentile and the top 5% of households have a mean income of $526,000!

The Piazza is a mixed-use development with luxury apartments, dining, and shopping next to Liberties Walk, a fun urban center soon to be redeveloped. Along North 2nd Street, locals enjoy an exciting nightlife with dance clubs, craft beer, international restaurants, and North Bowl.

It’s easy to see why Fairmount is one of the richest neighborhoods in Philadelphia! This iconic neighborhood may be small, but it’s home to some of the most famous attractions in Philadelphia, stunning architecture, and natural beauty. Together with Fishtown, it’s in the expensive area of Philadelphia known to locals as the “art museum area.” Fairmount is famous for Benjamin Franklin Parkway, a boulevard inspired by the Champs-Élysées of Paris, and it’s home to the world-famous Philadelphia Museum of Art, the Franklin Institute, and Boathouse Row.

Rittenhouse Square is an idyllic community surrounded by the skyscrapers of Center City yet an enclave of arts, culture, and natural beauty. Residents enjoy a community environment with frequent events like the annual Christmas tree lighting and the Rittenhouse Square Spring Festival.

Manayunk is one of the ten wealthiest neighborhoods in Philadelphia, but it offers a small-town lifestyle that attracts families and keeps residents rooted to the community for decades. Despite its relative affluence, it’s also very affordable compared to most neighborhoods on the list. The top 5% of households in the neighborhood have a mean income of $265,000 with one in three households earning six figures.

Manayunk features a variety of housing options including traditional Victorian homes and rowhouses as well as trendy lofts. Its Main Street is lined with boutiques, art galleries, coffee shops, restaurants, and nightlife spots. If you’re looking for a relaxed vibe that still offers convenient access to shopping and a fun nightlife nearby, Manayunk is a great choice.

Queen Village – Expensive Neighborhood of Philadelphia with a Low-Key Atmosphere

The historic residential neighborhood of Queen Village is low on this list of the richest areas of Philadelphia, but home prices here are among the highest. The median household income of the top 5% living in Queen Village earn $460,000. Almost 15% of households earn more than $200k!

There’s an interesting story behind the development of Queen Village. To attract people to the area, developers constructed many wood homes that were cheap to buy in violation of city ordinances to prevent fires. While Philadelphia was controlled by Quakers who banned theaters, Queen Village allowed theaters to operate with the first opened in 1766. The neighborhood is still home to some of Philly’s oldest homes.

Queen Village offers an ideal location just south of Center City and the Society Hill neighborhood. Along with an easy commute, Queen City provides a quiet sense of community and the feel of a European village yet easy access to the amenities of surrounding areas of Philly.

Map of Richest Neighborhoods in Philadelphia

Have you settled on a beautiful Philly neighborhood to call home? After narrowing down your many options, Suburban Solutions is standing by to help you get settled in. Call our 5-star Philadelphia movers for a free quote and the top-notch moving experience you deserve.