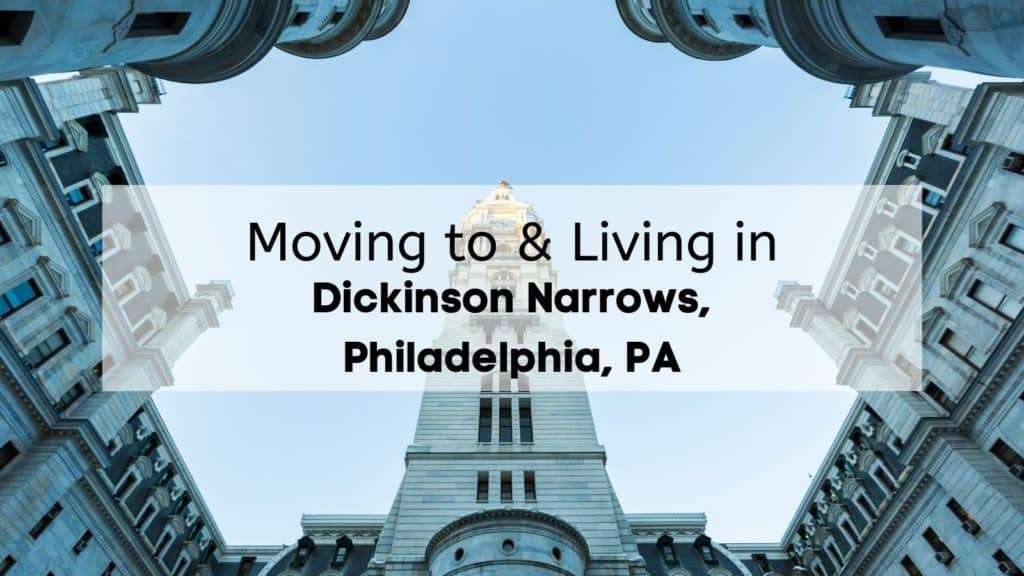 Dickinson Narrows is as old as European settlement in North America — although, interestingly enough, its origins are not English. In fact, it would be Swedish settlers who would first arrive in this area in 1638. However, the area changed hands a number of times in the initial rush of European colonization, with the Dutch taking it over in 1655, but eventually being driven out by the English by 1683.

With a land grant from the English king, the skeleton of what would eventually become Philadelphia was quickly forming. Explosions of ramshackle development occurred, mostly of the cheap, wooden townhouse variety, as more and more people flooded in from across the sea. By the 1800s, the area of Dickinson Narrows specifically had become something of a hub for Philadelphia’s growing metalworking industry, which brought in more and more people. However, during the 20th century, more new arrivals from across the sea continued to change the character of the neighborhood, with the area then becoming something of a “shopping mecca” with a particularly Russian Jewish character.

Nowadays, Dickinson Narrows has continued to be an area rife with small business and restaurants, and its unique character has drawn in a young and hip crowd.

During the early days of Philadelphia’s history, Dickinson Narrows would’ve been an area that benefited greatly from its nearness to the Delaware River that George Washington so famously crossed during the American Revolution. Although perhaps not necessarily so relevant today, Dickinson Narrows still has a culture centered around its position near the river. If one is worried about transportation by car, you’ll find that all of Philadelphia’s roads and highways are within easy reach of this area.

Considering that Dickinson Narrows is well-known for its walkability, the likelihood that you’ll even have to utilize Philadelphia’s robust public transportation system is low, but it’s certainly there if you need it. Dickinson Narrows is also located just across the Delaware from New Jersey, so crossing state lines will also be easy here.

Dickinson Narrows is home to 12,065 people. Demographically, 72% are White, 12% are Asian, and 7% are Black. As you would expect of an East Coast American city, there are also many enclaves for other unique ethnicities in this area as well. Dickinson Narrows’s population is very skewed towards women, with females making up 57% of the neighborhood’s residents.

Part of Dickinson Narrows’ charm is many of the old landmarks, of which quite a few still stand today. A primary landmark for quite some time was the Mt. Sinai Hospital, built by Russian Jewish immigrants, but this building was demolished in 2016. The Vare-Washington School is a beautiful piece of architecture built in 1912 that still operates as an elementary school to this day.

Worried about crime in Dickinson Narrows? Philadelphia is certainly no stranger to criminal activity, and, to some extent, this will extend to Dickinson Narrows as well, with a lackluster rating on Niche for crime. However, Dickinson Narrows has the benefit of being a more affluent neighborhood, meaning police are more likely to be present and violent crime not so prevalent. Infinitely more likely is property crime, prevalent in cities all over America, which can be negated by practices like properly locking up your property.

What to Eat, Do, and Shop in Dickinson Narrows, Philadelphia, PA

When it comes to shopping in Dickinson Narrows, prospective residents will be pleased to hear that just about everything they need can be found within walking distance. Although outside neighborhood limits, the Snyder Plaza shopping center is incredibly close by, and Dickinson Narrows is also home to a variety of smaller shopping establishments, like Food Market and First Oriental Market.

Feeling hungry? One of the primary draws for the neighborhood of Dickinson Narrows is that it’s a place with excellent eateries and restaurants a-plenty, such as The Dutch, a charming little diner that serves an array of excellent breakfasts and lunches which make it a popular morning or midday stop. Dickinson Narrows also has a wonderful local Mexican restaurant, called Tamalex, which will please those with an itch for Mexican cuisine. There are a multitude of local, hole-in-the-wall restaurants in this neighborhood, which might be one of the primary reasons it draws in so many people. You’ll never be looking for good food around here for long!

It may surprise you, but Dickinson Narrows is particularly well-known as an area with wonderful and clean parks, something which many neighborhoods nearby cannot claim. The primary park that comes to mind when one thinks of this neighborhood is Dickinson Square Park. This park is an excellent place to spend the day with family and friends, and enjoy a breath of fresher air for when the city gets a bit too claustrophobic.

Dickinson Narrows’s property prices are a bit of a mixed bag, with both affordable and expensive properties being stuffed into the same neighborhood. The median sale price of a home in Dickinson Narrows is $450,000. This is certainly higher than average for the Philadelphia metropolitan area, but Dickinson Narrows’ unique culture is more than worth it. According to Redfin, the median amount of time for a house to be on the market in this area is 25 days, with 99.8% of homes being sold for precisely their listed price.

Renting is generally in line with most other nice areas of the city of Philadelphia, with the average monthly rent for all apartments being $1,736. Typically, units rented here are quite small, with an average square footage of around 800 feet. Dickinson Narrows is one of Philadelphia’s most interesting neighborhoods, one that is truly an organic taste of Philly’s vibrant culture, which is the primary factor in the area’s rapidly growing population. For that, the seemingly unreasonable property prices make more sense.

Seen all that Dickinson Narrows has to offer, and ready to begin your journey on making this community your new home? Give Suburban Moving a call! Our crew of highly-trained professional movers is ready and waiting to fundamentally transform your move into a simple and easy process, all for an affordable price! Call now at 301-928-8669 or fill out our online form for a free quote!